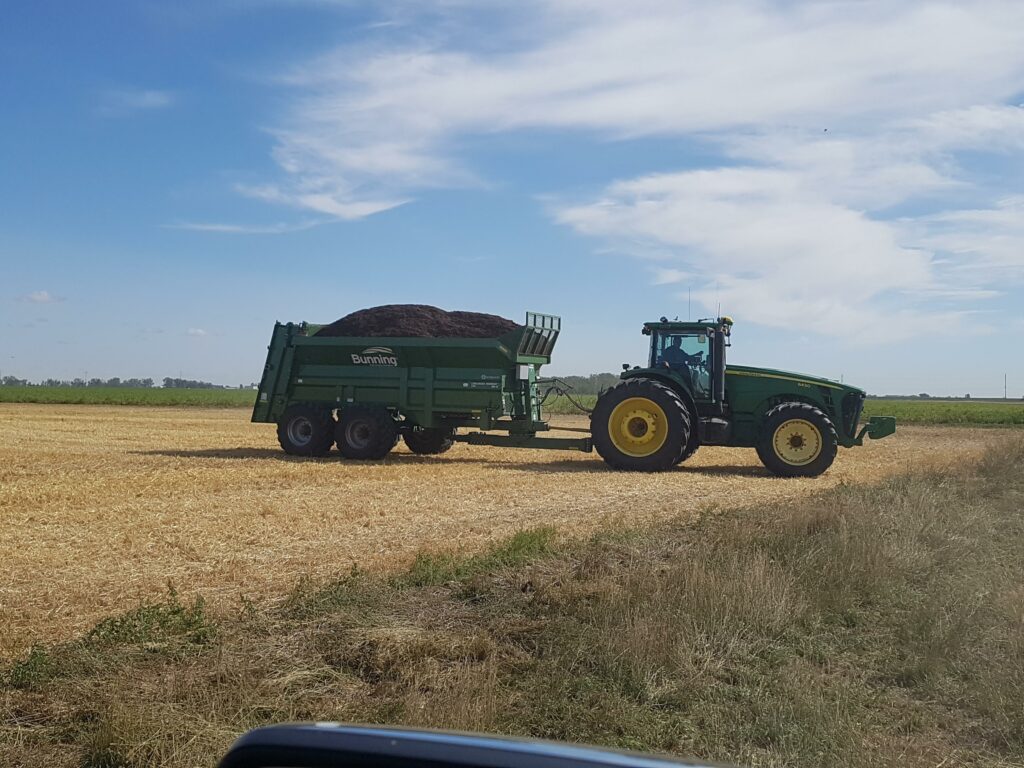 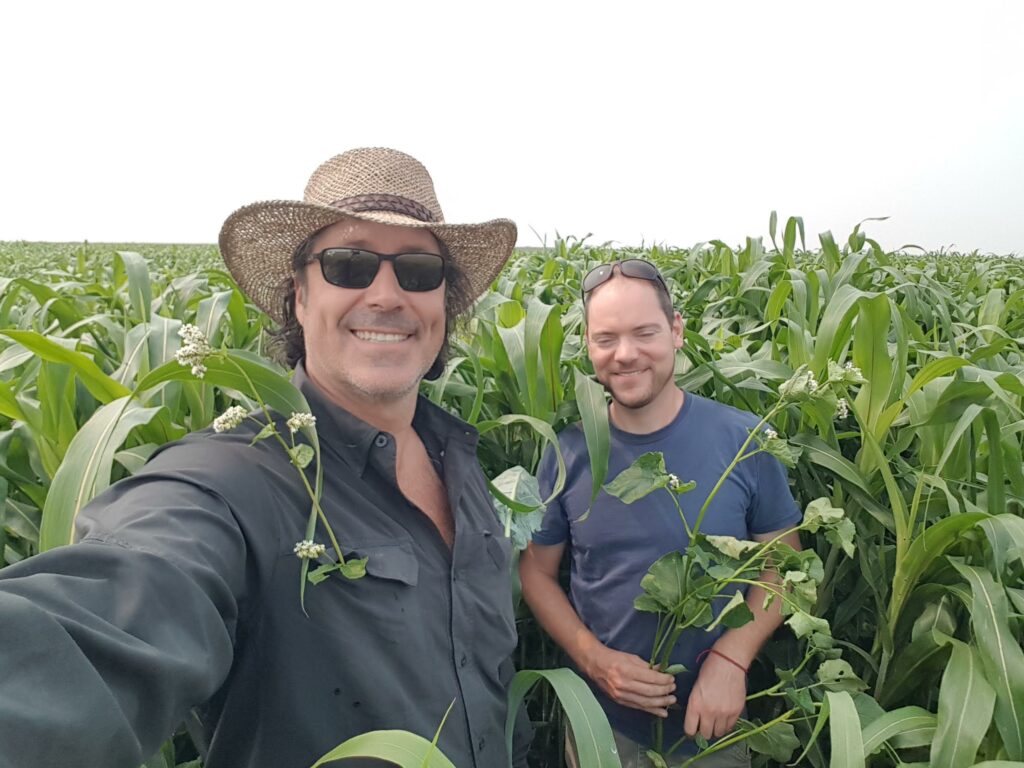 If you’re enjoying a bag of potato chips in Western Canada, there’s a 1 in 5 chance the potatoes were grown by Harold Perry and his family at the Perry Family Farm, a fourth-generation operation located in Lethbridge County in southern Alberta.

Together, Harold and his brother, Chris, and his father, Gerald, work collaboratively as partners to manage 5000 acres of irrigated land producing potatoes — varieties of chippers, russets, and red Mozart potatoes — along with other field crops, including hard red spring wheat, winter wheat, barley, sunflowers, green peas, seed canola. The Perry family prioritizes environmental stewardship through their approach to soil management and a number of exciting renewable energy projects that they’re implementing on the farm.

Harold grew up on the farm, and after graduating from high school, went on to pursue a degree in Agriculture at the University of Lethbridge. In 2006, he was awarded a prestigious Nuffield Canada Agricultural Scholarship. “My research focus was on healthy soils for healthy crops for healthy populations,” says Harold, who traveled to New Zealand, California, and Mexico to learn about different agricultural systems and technologies. His personal research focus led him to several countries in South America, including Argentina, Chile, and Brazil, to visit with and learn from a network of farmers practicing no-till agriculture. He credits the region’s success with mobilizing large numbers of no-till farmers. “They have a very advanced group of people working on soil science,” he says.

Harold and his family are farming with future generations in mind. His oldest daughter just graduated from college with an agricultural degree. “It looks like a fifth generation might be coming to our farm,” he says. “We would like to pass on the farm with a more resilient soil than we received it.” 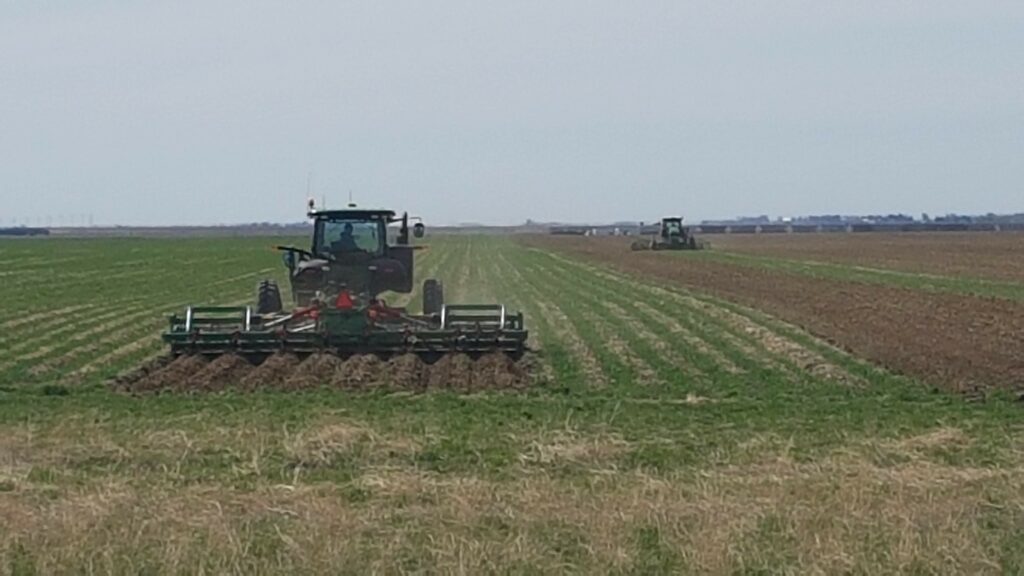 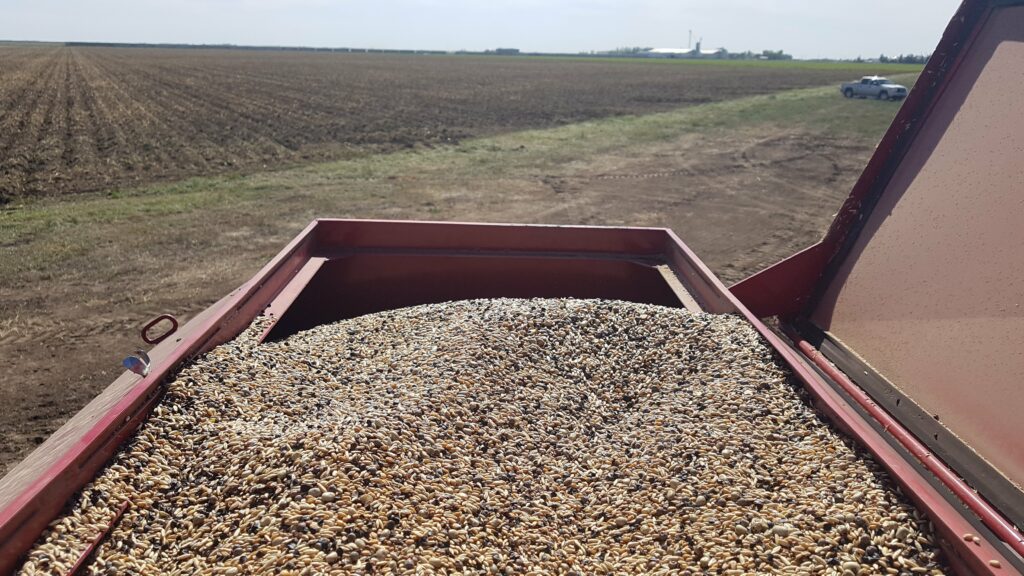 “We recognize that with potatoes, there’s a great deal of soil disturbance,” explains Harold. He points out how potatoes are planted 6 inches deep in the soil and the blade of the potato harvester goes even deeper in order to harvest the crop. Conventional potato farming isn’t exactly gentle on the land. As a result, the Perry’s are implementing a number of different strategies to reduce tillage, add organic matter back into the soil, and increase nutrient cycling.

Harold practices multi-species cover cropping at various stages of potato production. They plant a cover crop before sowing potatoes with the goal of decreasing the pH of the soil to help free up some nutrients, such as potassium and phosphorous, which aid in nutrient cycling.

Harold also puts in winter cover crops, after the potato harvest, relying on a less expensive and more cold tolerant cover cropping blend, including fava beans, oats, Austrian winter pea, along with winter canola and cereals. He’s hopeful these hardier crops will develop sufficient soil armour to reduce erosion. “The more cover cropping you can do, the better for your soil. It’s beneficial to both soil health and biology diversity to cover the soil with plants in the pre and post planting seasons, practicing companion planting, underseeding, or intercropping,” explains Harold.

Twenty years ago, Harold began to implement the practice of “fall ridging” with his potatoes, or planting potatoes into a series of hills, or mounds. “The common practice is to till once, or twice, make the soil nice and loose, and then build hills from that,” explains Harold. “Instead, we are fall ridging for potatoes directly into grain stubble, using our irrigation to get the soil to the right moisture, to enable a single pass. Our fall ridger has a valmar that we use to seed a multi-species cover crop.” The goal is to increase the soil’s surface area, so it dries faster in the spring for planting potatoes, along with a cover crop.

In addition to these methods, Harold is determined to minimize tillage and his overall reliance on glyphosate, fungicides, and seed treatment, all of which can negatively impact soil biology. They don’t treat any of their grain seed, along with some varieties of their potatoes. “As soon as the seed starts growing it makes synergistic bonds with soil organisms,” explains Harold. “But if it’s treated, you’re impacting the seed’s ability to make those vital connections with the soil.” 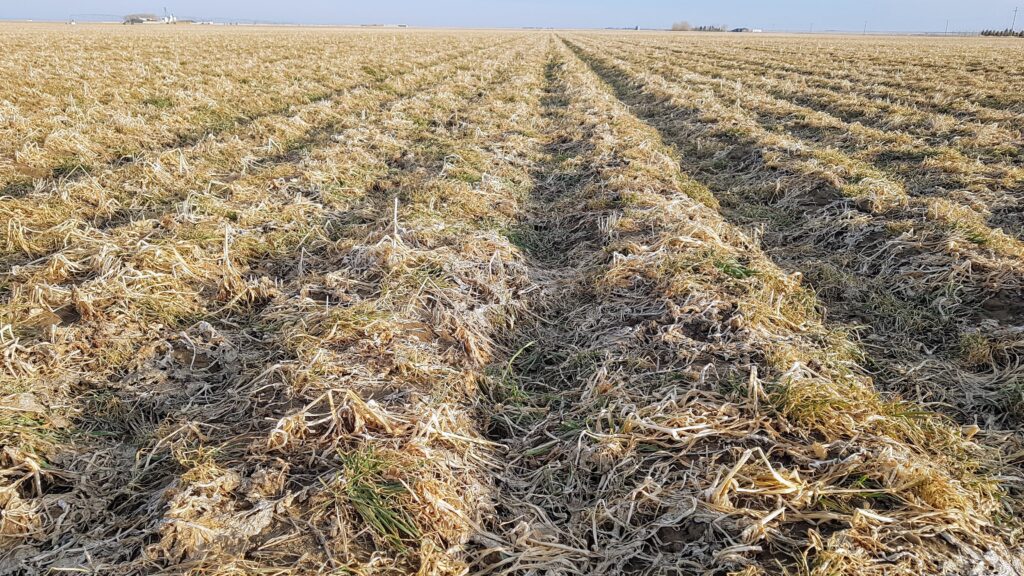 Harold believes that, as a farmer, he’s always going to be facing different forms of environmental stress. No matter if it’s extreme heat and drought events, wind storms, excess rainfall and water, bitterly cold winters, or soil pathogens. “These stressors are always going to be there,” he says.

For Harold, the basis isn’t scrambling to respond to environmental challenges, but rather, prepare for them. The number one focus on the Perry Farm is managing healthy soils that can tolerate and withstand extreme heat/cold, dry/wet conditions. “The goal is to get our soil as healthy as possible. We are really trying,” says Harold. “I feel like we’re gaining slowly. People always ask, ‘can you measure that?’ Well, no, but I’m confident that we’re going in the right direction.”

Harold had a big “aha moment” when he was introduced to the practices of Brendan Rockey, a regenerative potato farmer in Colorado, who is significantly reducing reliance on pesticides and fungicides, and in turn, planting companion crops, green manure and cover crops, and integrating livestock to add nutrients back into the soil. Harold points out how Rockey’s work demonstrates that  water filtration serves as a good measuring stick for determining soil health. Rockey’s soil acts like a sponge and can absorb large amounts of rainfall compared to that of organic deficient soils.

“Organic matter and organic carbon in the soil can hold 10 times more water than just straight soil texture itself,” explains Harold. “So the more you build your organic content, the more resilient the soil. The plants will be better able to fend off pests, tolerate larger rainfall events, prevent erosion and run-off, and handle heat stress. We’re trying to buffer ourselves against environmental concerns.”

Harold and his team take full spectrum soil and tissue analysis of potatoes, every week, and manage the soil accordingly. “For our high pH soils we know that zinc, manganese, and copper tend to run low,” says Harold. “So we try to add nutrients and microbes that our plants need at the right time.”

He credits the work of Australian regenerative farmer, Graeme Sait, for his work on soil nutrition. They follow Sait’s methodology of applying nickel, boron, and humid acid to spray onto crops in an attempt to be more efficient with their nitrogen. The Perry’s also source manure from neighbouring feedlots to compost and mix into the soil. This past year, they also brought livestock onto the land to help with nutrient cycling through a custom-grazing partnership, a practice that Harold says they will continue to adapt and explore in the coming seasons.

There isn’t a roadmap to soil health, says Harold. “The roadmap for soil health has an incredible amount of variables that are different for each growing region and different crops,” he explains.

It’s really about experimentation on the land, and sometimes, he admits, it doesn’t always work the way you expected, or hoped it would. Last year, for example, he tried out a green manure crop, but quickly discovered the soils were too wet for it — his pea crop rotted. “We planted in June and it could’ve been the heat and timing, but we aren’t entirely sure,” he says. The experiment taught him that, for his soils, multi-species cover crop is more effective. “It doesn’t always work,” says Harold. “But we know that we’re moving in the right direction.” 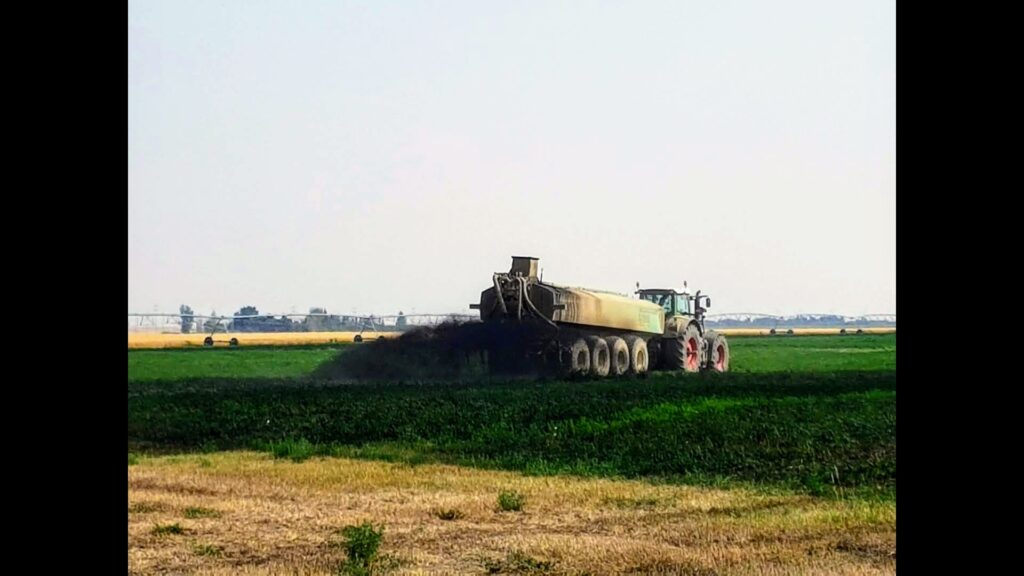 In 2014, Harold’s brother, Chris, spearheaded GrowTEC (Grow the Energy Circle Ltd), an initiative to convert organic waste produced on the farm into bioenergy and fertilizer, while offsetting carbon emissions. It all started with the potatoes—rotten potatoes, that is.

“We had many rotted potatoes that would be picked out,” explains Harold. “They wouldn’t go to the processing plants. We used to put those back out in the field, but we realized they were rotting because of disease and, as a result, we were inoculating our soil with the pathogens.”

The Perry family turned to the idea of anaerobic digestion, or more specifically, a biogas plant that would allow them to process organic waste (rotten potatoes) through high heat to produce methane gas and nutrient rich, pathogen free soil amendments.

“The anaerobic bacteria eat through all the organic matter and produce methane,” explains Harold. “And then we catch enough methane to run the equivalent of a train engine, 24/7. It supplies our farm with electricity needs — and three times as much.” The excess energy is then sold directly back to the Alberta electrical grid system.

In the first phase of the project, the biogas plant processes 20,000 tonnes of organic waste annually producing 4000 MWhr of renewable energy. They produce over 18,000 tonnes of pathogen free organic fertilizer. “We can fertilize between two to three fields with 10,000 gallons of the byproduct, which is rich in nutrients,” explains Harry.

Looking forward, the Perry family is also exploring new partnerships, including with a local First Nations organization, to establish a future solar farm along the edges of ponds. 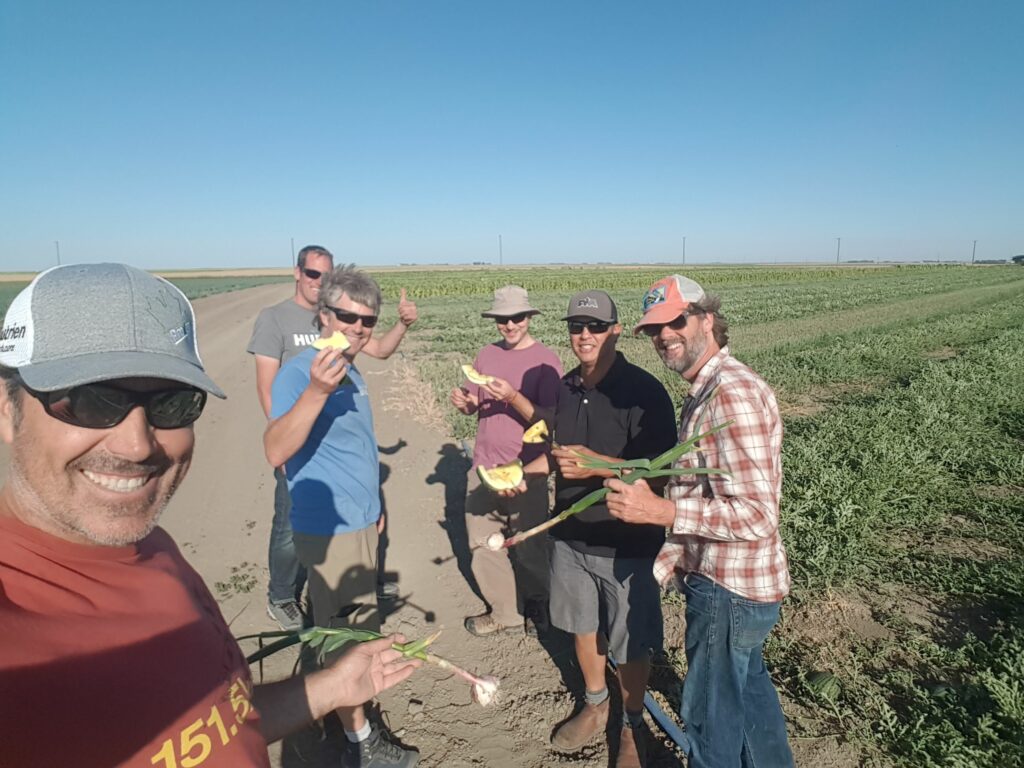 Brothers Chris  (Kyra) and Harold (Jill) Perry farm together with their Father Gerald (Birthe). They are progressive leaders with a vision to integrate environmental stewardship and innovative technology into agriculture and the rural Alberta landscape.

Today the farm is a diverse operation comprising ~5000 acres of irrigated land producing a variety of crops for numerous clients.

The Perry family has made environmental stewardship a priority on the farm and currently has a number of innovative and green initiatives underway.