With more and more people choosing to live rurally, acreage owners and surrounding rural communities throughout Alberta can play a pivotal role in building the low-carbon economy of the future. Climate solutions are often viewed as being an inconvenience in our everyday lives. However, many don’t realize that climate solutions (both on the acreage/farm and at home) have multiple concrete benefits that go beyond mitigating climate change, like:

It is a win-win strategy.

Established in 2017, Rural Routes to Climate Solutions (a Stettler Learning Centre initiative) provides opportunities for rural Albertans to learn more about and reap the benefits of climate solutions.

By building connections and sharing information we are empowering rural Albertans to make informed decisions on how best to modify their farming, ranching and daily living practices to mitigate and respond to our changing climate landscape.

We run events (workshops, webinars and farm field days) and produce a podcast and Farmer’s Blog so rural Albertans and agricultural producers can find out more about the climate solutions that work best for them. We cover topics like:

We also recognize that interested participants do not have a lot of time to attend workshops and farm field days, which is why we do all we can to make information gathered from events available online, through our: 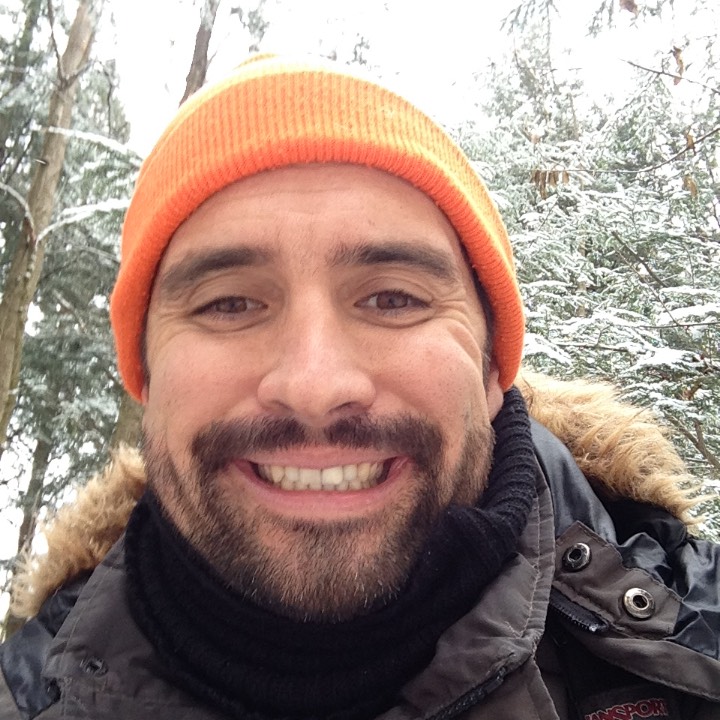 Derek was born and raised in a small town in southern Ontario called Brooklin. His only connection to agriculture as kid was growing pumpkins on his grandfather’s acreage and selling them out of a wheelbarrow on his street. He picked up a degree in history from Wilfrid Laurier University and hit the road shortly thereafter, spending the next seven years of his life working as a tour guide in Germany. It was a stint on a farm in Tasmania that plunged him down the path of pursuing farm work wherever he could find it. He returned to Canada in 2013 and moved to Alberta in 2017.

He has a decade of experience under his belt as an organizer and communicator on climate and food security issues. Derek has worked for national not-for-profit organizations like Food Secure Canada and his articles on climate change and clean energy have been published in The Narwhal and National Observer. His agricultural experience is all over the map (literally)—a wild boar and shiitake mushroom farm in Quebec, a CSA in Ontario and cattle farms in Alberta—and he was part of Young Agrarians Alberta’s first ‘graduating class’.

Derek is probably best described as part community organizer, part somewhat-skilled farmhand and part storyteller. He currently splits his time between Calgary and whatever farm in central Alberta he is working on during the growing season. 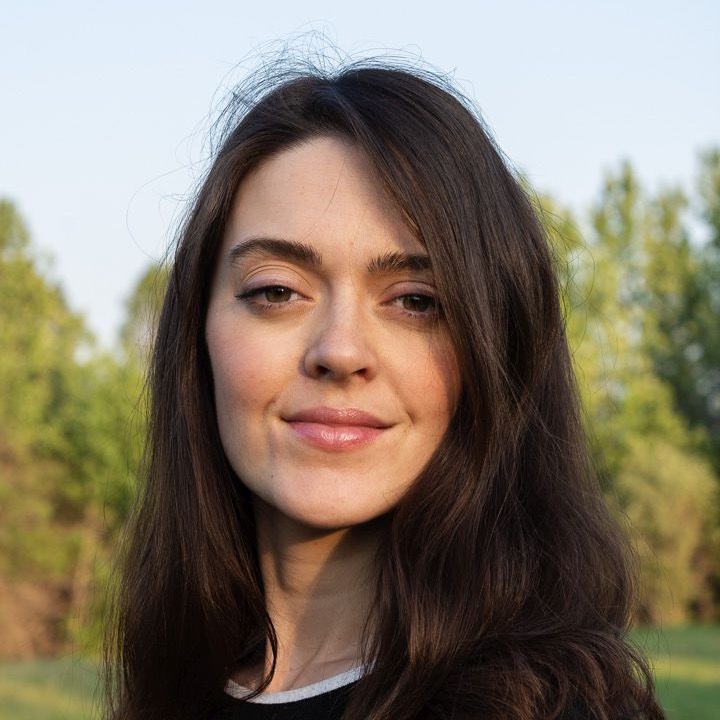 It wasn’t until 2015 that she found herself back in her home town and starting a new adventure – helping her brother start a tree farm! It was during this time that her interests in farming, gardening, plants, and wildlife began to re-emerge. She and her husband now live on a 10-acre homestead surrounded by the Boreal Forest near Jackfish Lake with their two cats, who have refused their new roles as farm cats and are still living the (pampered) good life. They are currently living in and restoring the original homestead log cabin on the property and are in the process of converting it to a fully off-grid accommodation.

Marie currently sits as the President of the Athabasca Farmers Market Association and attends weekly markets where she sells eggs from her heritage flock of hens and handmade soaps infused with local herbs and plants. She is passionate about being an active and positive member of her community, and enjoys spending her summers at the lake and camping as much as possible. 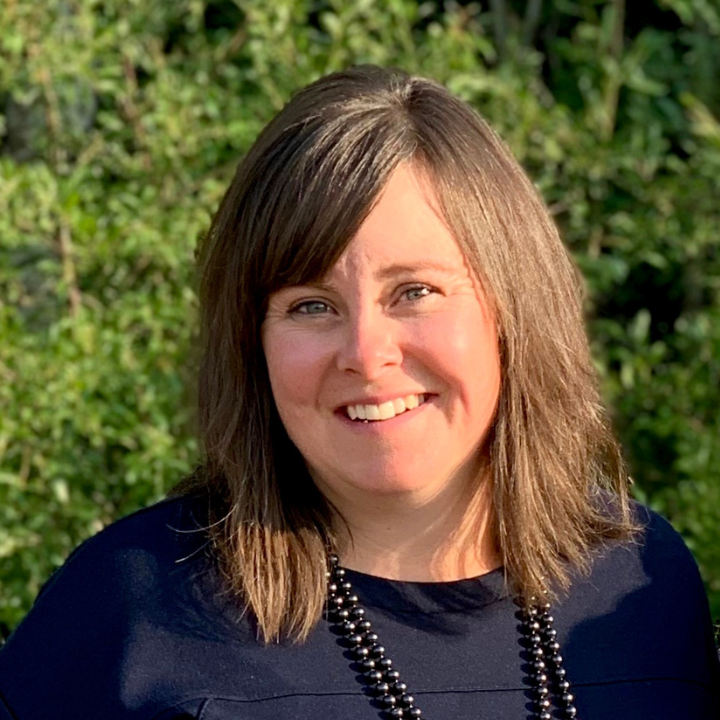 Shiana is a fourth generation rancher and lives near Brownfield with her husband and 3 daughters. Regenerative agriculture isn’t a new term to Shiana and her family. On their family ranch, they use a holistic approach in raising beef and dairy cattle, pastured broiler chickens, and laying hens. Raising nutrient dense local food for her family and community is a passion for Shiana. She has passed  along her love of ranching to their daughters, who are currently raising pastured pork.

Shiana and her family take stewardship very seriously and are working hard to sustain and regenerate their soil health. Their ranch’s land base is over 92% grasslands and they’ve implemented planned grazing. Shiana hopes to provide her daughters with the opportunity to continue on the family legacy and heritage.

In her free time, Shiana enjoys camping, gardening, and riding horses. During the winter months, you’ll find Shiana either watching her girls play hockey or hitting the ice herself for a game or two. 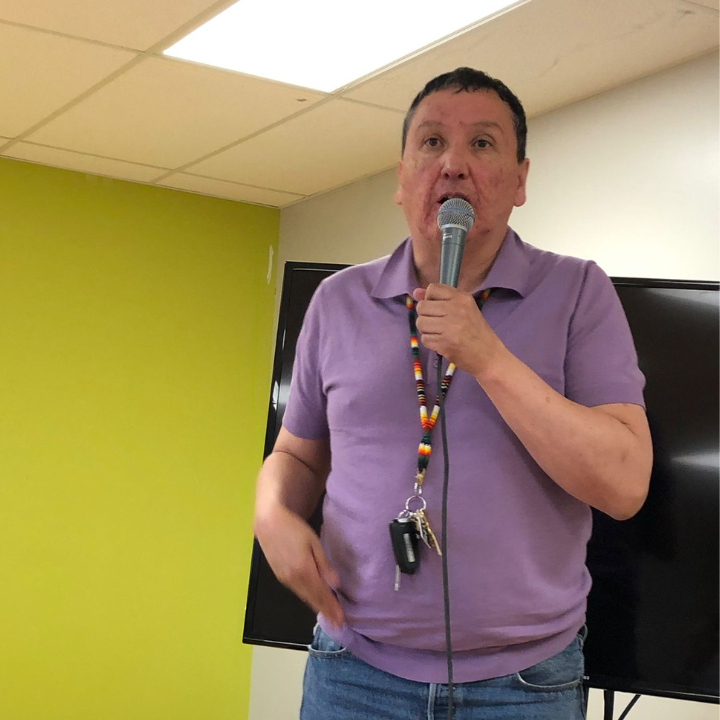 Lance was born and raised on the Kainai First Nation (Blood Reserve) in southern Alberta. His background is in the communications arts field with an extensive knowledge in audio and video production. He recently served as councilor for the Blood Tribe Chief and Council from 2012-2020. It was from his participation on the Lands Committee portfolio that Lance realized the importance of farming and ranching best practice and the revitalization of traditional Blackfoot knowledge in sustaining and reintroducing the native plants and animals to Siksikaitapi (Blackfoot Confederacy) territory. This recently included the Kainai Iinnii (buffalo) project in which the Kainai First Nation has introduced a buffalo cultural herd into the community.

Lance currently sits on various organization boards in neighbouring southern Alberta towns and cities in assisting Indigenous community members with the proper support for housing and resources for living in urban communities. His interests include art, music and graphic arts design. Lance lives in Lethbridge with his family where he operates GhostRattle Arts, a small graphic design, multimedia and t-shirt business. 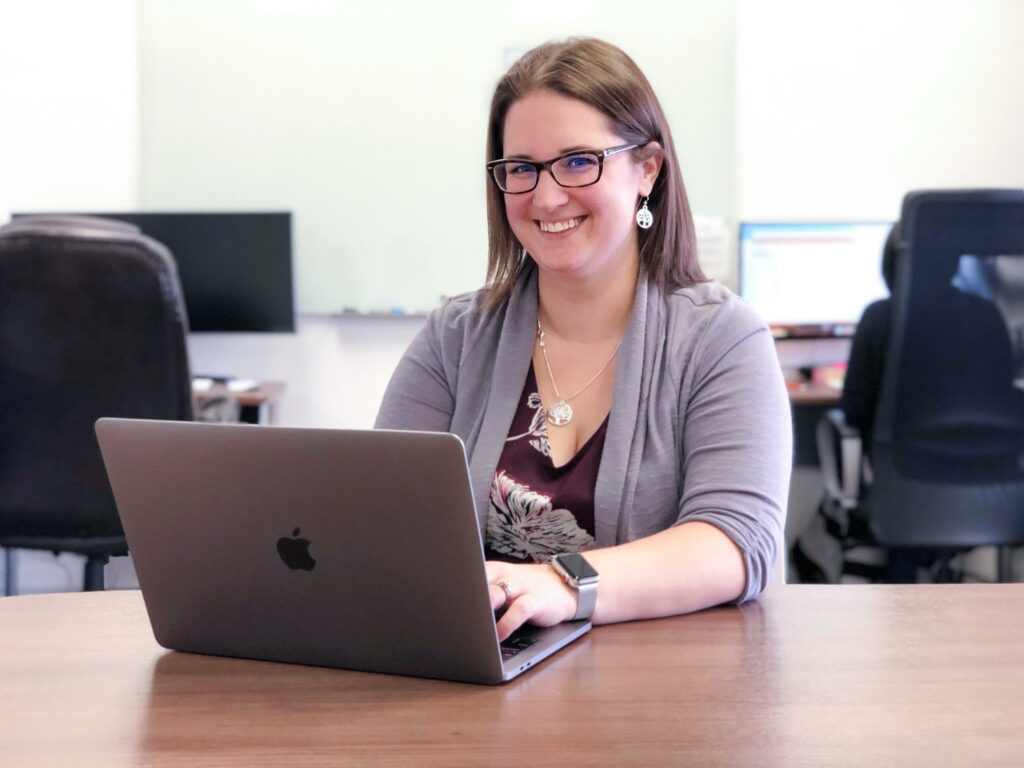 Although born in Calgary, Kristin spent most of her childhood living in a hamlet just north of Okotoks.  A small farming community, Kristin was fortunate to have several neighbours who taught her to ride and care for their horses, which she continued to do until she graduated high school.

In 2009, Kristin graduated Mount Royal University with a communications degree and moved to Yorkton, Saskatchewan, to support her husband’s career in radio. This is where she developed a love for working with non-profits. Several year’s later, Kristin and her husband moved back to Alberta, and settled in Red Deer.

Today, Kristin and her family reside in the beautiful town of Sylvan Lake, Alberta. In addition to caring for two children and three dogs, Kristin loves to spend her free time crafting – bead weaving, clay, crochet, knitting, cross-stitch, felting – you name it, Kristin most likely has learned it. 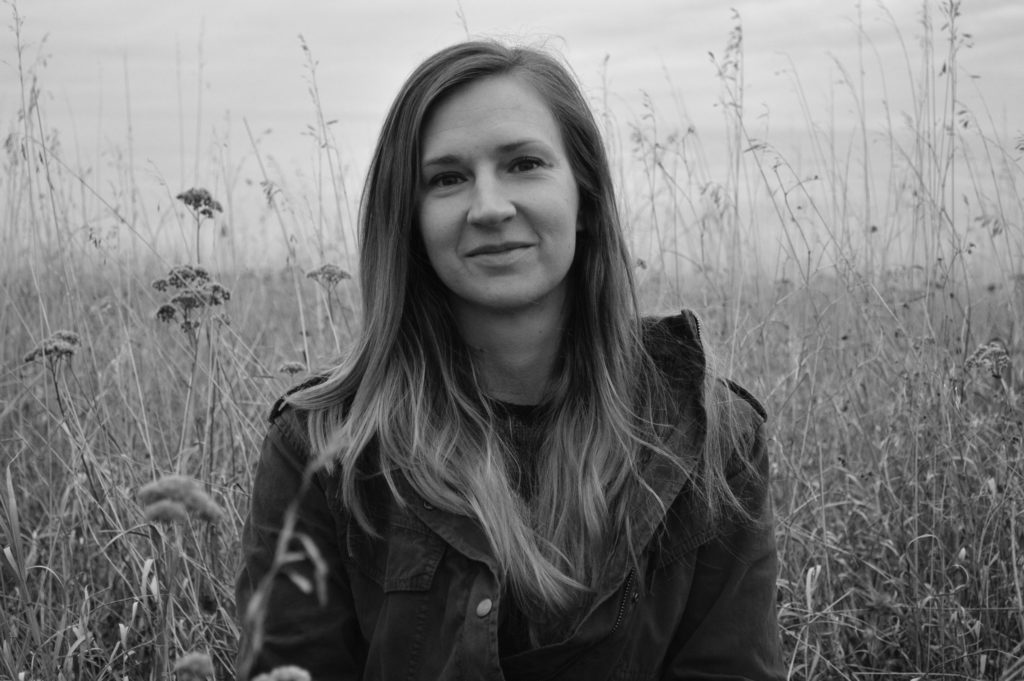 Trina’s rural roots stem from Peace River, Alberta, where she grew up passing many hours on the land: hiking, horseback riding, gardening, hunting and fishing. She eventually moved south to the big city and pursued a BA in Cultural Anthropology at MacEwan University.

In 2013, from Kabale, Uganda, Trina began to document and write about the experiences of female food producers. Five years later, Trina was thrilled to publish Women Who Dig: Farming, Feminism, and the Fight to Feed the World (University of Regina Press, 2018), a book that captures her research with over 140 women farmers from three different continents and eight different countries. The book focuses on many of the challenges facing women farmers, while celebrating the ways they’re overcoming challenges – climate change, gender-based violence, access to farmland – and feeding their local communities.

Today, Trina is a freelance writer and author. She spends her summers working at a boreal fire tower in northwestern Alberta, where she tends a huge vegetable and herb garden. She recently published her second book, Lookout: Love, Solitude, and Searching for Wildfire in the Boreal Forest.

Funding for rural routes is provided by: 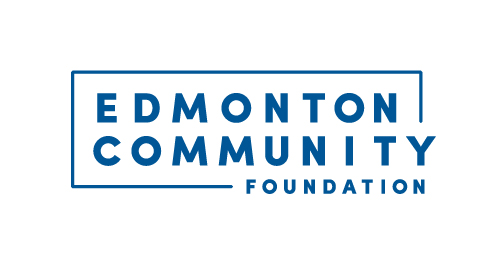 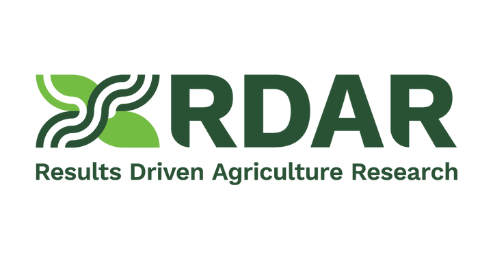 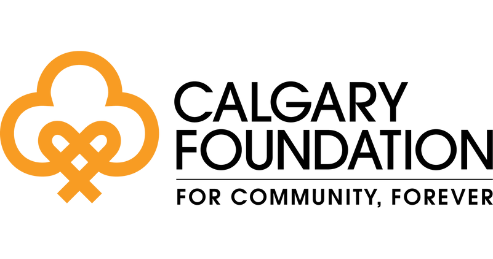 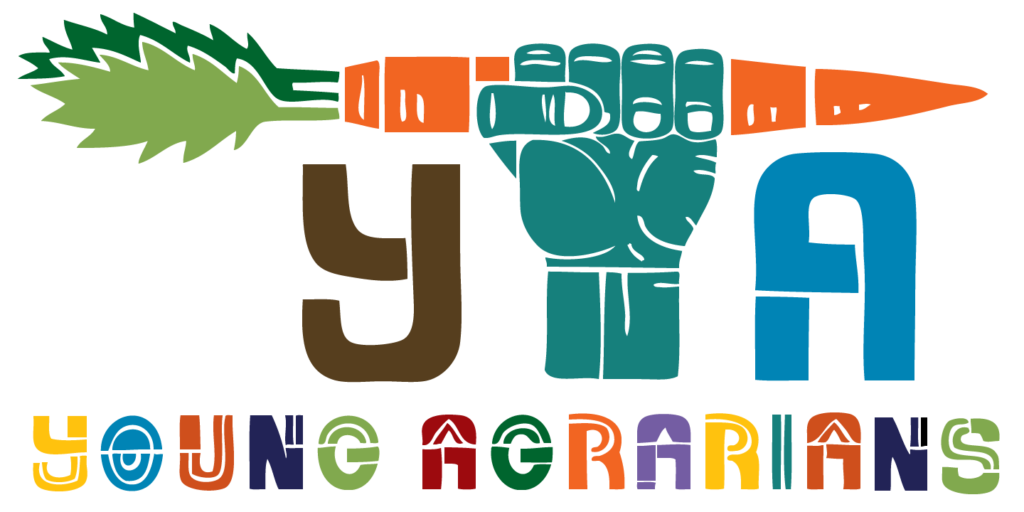 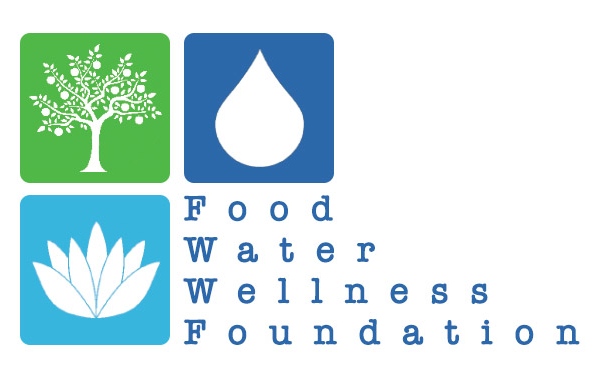