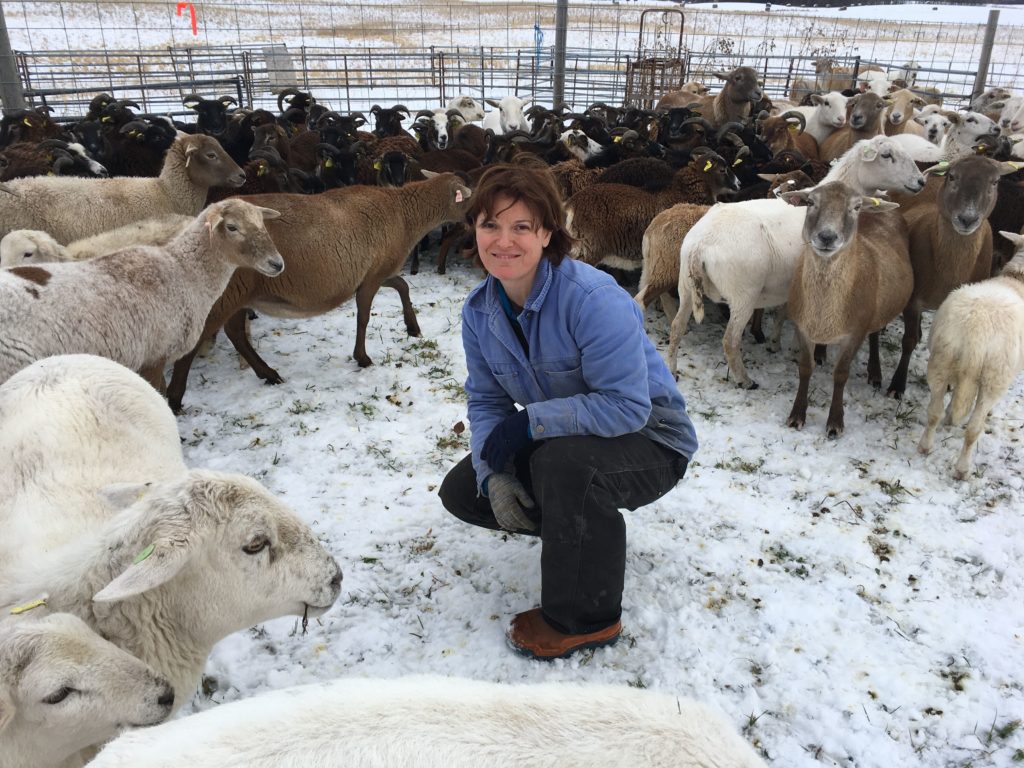 Working with natural landscapes and ecosystems to raise and preserve the genetics of heritage sheep, pigs, chickens, and guardian (herding) dogs

Carla Rhyant manages Rhyant Rock Farm, a 70-acre property in Parkland County, located only half an hour west of Edmonton, in central Alberta. Raised in the interior of British Columbia on a mixed farm, she’s always had a special love for farming and animals. When Carla moved to Alberta, she began working directly with producers in applied agricultural research. In 2007, she felt inspired to get back into sheep farming and decided on two breeds: American Soay and Katahdins, chosen for their foraging and mothering traits.

Carla is passionate about preserving and expanding rare heritage breeds and genetics. Today, she specializes in raising heritage breeds of sheep, chickens, pigs, herding and guardian dogs, that are well suited to her land, the northern boreal climate, and lifestyle.

She direct markets her pasture raised meat, along with hatching eggs, chicks, older birds, and eggs for consumption.

Recently, we interviewed Carla about her passion for raising heritage breeds, land stewardship, rotational grazing, and what motivates her to farm with nature, as opposed to against it.

RR2CS: Can you tell us more about the history of Rhyant Rock Farm?

Carla: When I bought this property six years ago, the land was half-timber and half open land – and the open land was just barley stubble.

I wanted to put forth best management practices I had learned to work with the land, wildlife, and help to restore what was here originally.

There’s a lot of water on this property that drains from the north, so I was able to partner with ALUS to put in fencing around the riparian areas. These are areas that I can access in the winter or drought seasons. But mostly, I use them as exclusion areas, so the sensitive wetlands aren’t being negatively impacted by the sheep.

I also partnered with Ducks Unlimited, who helped subsidize the cost of seeding the pasture. I seeded 30 acres of the barley stubble with a high legume pasture – it’s a mix of five different grasses, alfalfa, and cicer milkvetch, alfalfa and sainfoin. In addition to these partnerships, I work with a local beekeeper, TLRP Honey, and the hives help with pollination.

It’s been a slow process over the past six years – I work a full-time job apart from farming – to put in all the fencing, but today I have 17 paddocks on one side of my driveway, and an additional nine paddocks that I use as breeding pens. RR2CS: Can you tell us more about your rotational grazing practices?

Carla: The rotational grazing system has increased my grass production considerably. During the summer, I’m able to graze my sheep 2 to 3 three times through my pastures, and I stockpile as much grass as I can for the winter. Honestly, this year I was grazing my sheep right up until the cold snap in February before I pulled them off. The rotational grazing has been hugely restorative to the land. The sheep graze and deposit manure and recycle nutrients into the soil. The grass grows back at over two feet high before I graze the next pasture.

And during the winter, I roll the hay bales out all over the pastures, the sheep feed on the bales, and the nutrients cycle back into the soil. The other benefit to rolling bales out into the pastures is that I don’t have to spend much money on bedding for the sheep.

I’m trying to keep my production costs as low as possible. For example, I don’t have shelters, rather I rely on the trees and the natural topography of the land to protect them from the wind.

When I do have to use bedding, I prefer using pea straw, which I discovered over the last couple of years. It’s higher nitrogen and really quite fluffy, and even in cold weather snaps, it doesn’t tend to compact into a mat on the ground. The sheep rifle through it, eat peas and leaves, and they’re constantly moving it around so it remains elevated off the ground. I also use it in the duck house, as the ducks are really messy and the straw helps to absorb moisture. RR2CS: What are some other ways you’re working to steward the land?

Carla: I strive to manage for wildlife inclusion – I’ve left shelterbelts on the west side of my property, for example, and the alfalfa we planted with Ducks Unlimited is intended to increase waterfowl populations. As a result, there’s many birds here.

I rely on my guardian dogs to keep coyotes and foxes out of the sheep pens. The coyote population is tremendously high here, even though we are so close to Edmonton.

Overall, my goal is to keep wildlife out of certain areas on the property, away from the livestock, but with access to some areas on the farm. The back of my property is forested and it’s just full of wildlife tracks: deer, foxes, coyotes, porcupines, and rabbits. In the winter, we go walking back there and it’s quite the track hunting adventure.

RR2CS: Why is this ‘farming with nature’ approach important to you?

Carla: I think it’s just always been who I was. I remember being eight years old and fundraising money for whooping crane conservation. I grew up on a farm and my family were also hunters. I grew up with a mindset of integration and being a part of nature as opposed to separate from it. As I said, my property has a creek running through it in the spring, and so nutrient management is important because I only live a mile from the North Saskatchewan River. I do everything I can to keep the water here on the land, in the event of drought, but also because I can see the social impact that run-off can have on the water in the city of Edmonton.

I’ve worked in the natural resource sector for many years, and I have a good understanding of the big picture. As a result, I try really hard to be carbon neutral on my farm. I only feed the sheep every three days in the winter, and I start my tractor as little as possible. I also belong to a food rescue program called Loop. Once a week, I go into the city and pick up a load of expired food from a grocery store and sort through it all. My pigs, sheep, and dogs are fed this way. It’s not only the food that would be wasted, but the packaging, too.

I’ve always said that farmers are some of the biggest environmentalists out there. There’s some remarkable people that have made some huge sacrifices (in terms of labour and profit) working for the bigger picture. We’re all here for the long run. I’m not just here for, say, 95 years, but my children, my grandchildren, will continue to live on this planet, too. RR2CS: You raise American Soay and Katahdin sheep, along with Icelandic chickens and dogs. Can you tell us more about your passion for heritage breeds?

Carla: In conventional agriculture, there’s essentially only two lines of broiler chickens, and it’s the same for hogs, too. When I began to consider the risks for disease – which is very real in this day and age, look at COVID-19 for example – I became really interested in learning more about heritage breeds. There’s certain breeds that are more disease, or parasite resistant. There’s also mothering instincts and attributes of food quality.

When you consider evolution, some breeds go extinct. But sometimes they lose popularity because they are smaller, or slower at production. I think as human beings we’ve gotten caught up with breeds that grow the fastest versus those that are of better food quality.

For me, I work off-farm, so I can’t be here 24/7 to lamb sheep, or getting up in the middle of the night and then going to my day-job and performing well.

It was important to me to find breeds – American Soay and Katahdin sheep – that are able to look after themselves in the hours when I’m not here.

With these breeds, lambing entails going out in the morning and evening and putting tags in the lambs’ ears. It doesn’t involve pulling lambs. It doesn’t involve 2 AM checks or anything like that. I also have Icelandic chickens and Icelandic sheep dogs (herding dogs), along with Kunekune pigs. These species nearly went extinct.

My belief is that it’s important to find animals that fit your farm. Don’t just say ‘I want to have X breed because it’s really pretty.’ It needs to work on your farm. RR2CS: What are some of the environmental challenges you’re facing as a farmer?

Carla: It’s the extreme weather patterns that make things challenging. Two years ago, when we had six weeks of blistering cold, it caused many problems: water freezing, equipment breaking, and trying to keep animals alive in that kind of cold. Also, we’ve had these extremely wet, rainy seasons to contend with – resulting in water drainage problems, for example. Excess water runs off from the neighbour’s property right through my breeding pens, so I’ve had to move the sheep to a high spot for lambing. Last year, in the spring, over a third of my property was under water.

As a farmer, you need to be able to plan for multiple scenarios. The trick is always having numerous tools to address the problems that you are faced with.

RR2CS: Do you think farmers can play a role in contributing to climate solutions?

Carla: Absolutely. And I mean, it can be the simple things like leaving shelterbelts on your property – trees capture carbon – and having more pasture land, which holds carbon in the soil, as opposed to, to working the soil up. It’s part of the reason I have timber on my land. We will eventually clear some of the mature trees, but with the intent that it will become a silvo-pasture system. I’ve also been pretty active about organizing farm tours here, either with the Parkland County, or local schools, as a way to help people learn and understand about soils, livestock production, local food systems, and the positive impacts farming can have on the environment.

The onus is on us, as producers, to communicate to people what we do as farmers and how we’re working with the environment.

Carla Rhyant manages Rhyant Rock Farm, a 70-acre property in Parkland County, located only half an hour west of Edmonton, in central Alberta. Raised in the interior of British Columbia on a mixed farm, she’s always had a special love for farming and animals. When Carla moved to Alberta, she began working directly with producers in applied agricultural research. In 2007, she felt inspired to get back into sheep farming and decided on two breeds: American Soay and Katahdins, chosen for their foraging and mothering traits.

Carla is passionate about preserving and expanding rare heritage breeds and genetics. Today, she specializes in raising heritage breeds of sheep, chickens, pigs, herding and guardian dogs, that are well suited to her land, the northern boreal climate, and lifestyle. She direct markets her pasture raised meat, along with hatching eggs, chicks, older birds, and eggs for consumption.