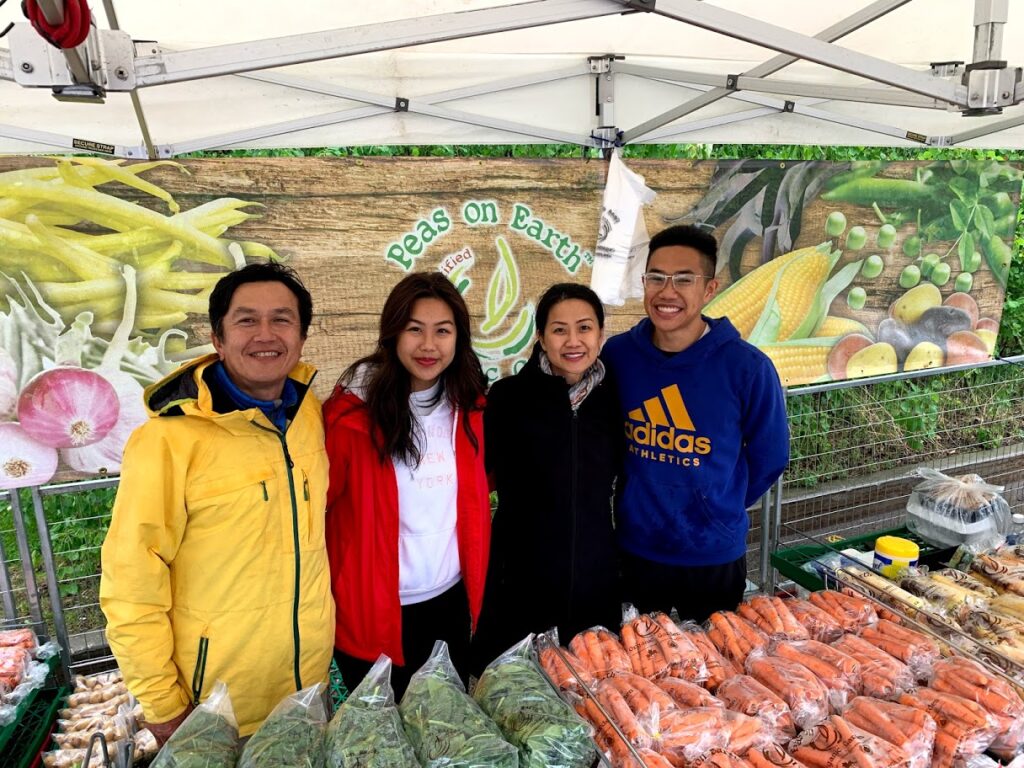 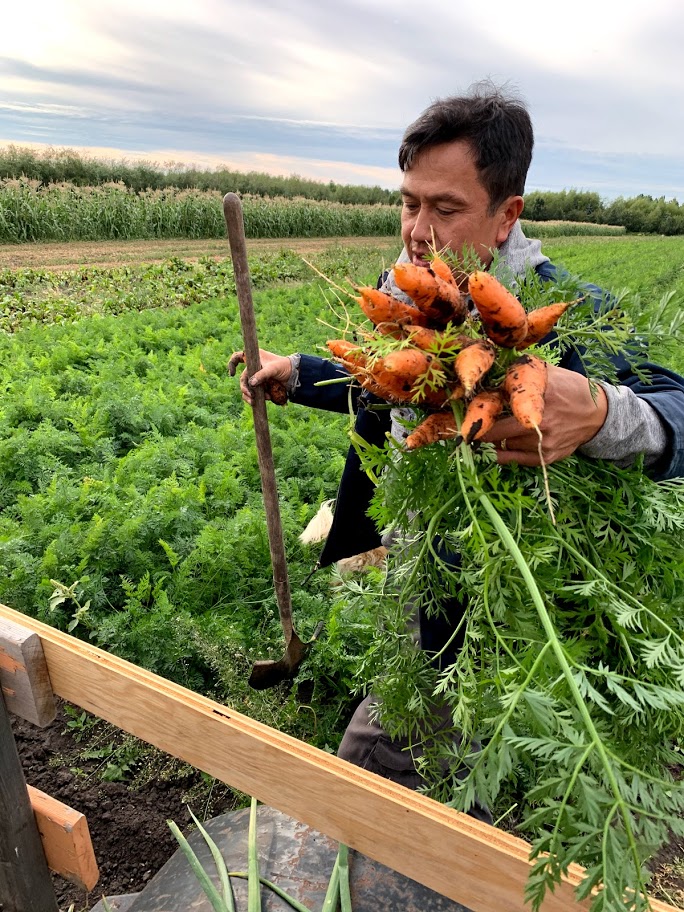 With over 34 years of growing organic food in northern Alberta, the Chen family is also striving for building healthy soil, plant vitality, and resiliency to environmental changes

In a world without environmental stress, plants wouldn’t be able to learn how to adapt and grow to their maximum vitality, says Eric Chen, a vegetable farmer at Peas on Earth Organic Garden, a 25-acre certified organic vegetable farm located in Sturgeon County.

Eric and his wife Ruby, along with their extended family, have been growing mixed vegetables in northern Alberta for nearly 35 years. The Chen family has seen it all over the past several decades, dealing with weeds, pests, and extreme climactic events. They have a deep passion for growing organic food and feeding communities in the Edmonton and surrounding area.

“Farming was always a calling for us,” explains Eric. “It really helped us grow as a family.”

Eric was born in Laos and spent part of his childhood in Thailand. His grandmother, originally from China, had farming roots, but his parents only kept a hobby garden and a few livestock. In 1979, when Eric was thirteen years old, he and his family immigrated to Westlock, Alberta. Two years later, he took a summer job working on a vegetable farm in Westlock. “That’s how it all started,” he laughs. “The farmer said to me, ‘Maybe you should start a farm’ – and eventually – I did!”

Eric’s family bought land outside of Westlock. He, his parents, and grandmother began to grow vegetables for the family and they took any surplus to sell in the local markets.

In 2000, Eric and Ruby founded ‘Peas on Earth’, a certified organic operation, located along the upper banks of the Sturgeon River. They focus primarily on field crop production, producing a wide range of veggies – “not just peas!” chuckles Eric – including potatoes, carrots, beets, peas, beans, kale and squash. They also grow a smaller volume of cucumbers and mixed salad greens in a greenhouse. Peas on Earth supplies organic food to seven different markets in Edmonton, St. Alberta, and the surrounding area. 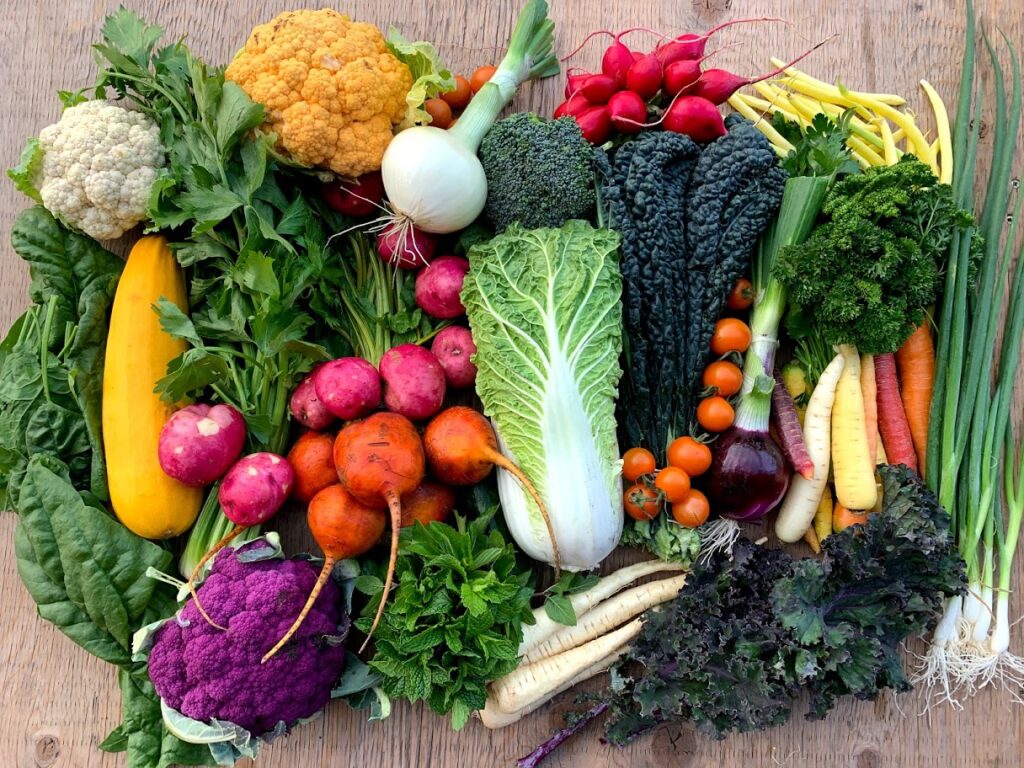 Peas on Earth has been certified organic for over 20 years, but they didn’t start out with organic farming methods. Eric remembers spraying herbicide on his vegetable crops and having mixed feelings about it. “It was strange that nothing else would grow but the crop. It just didn’t seem right to me,” he says. “Why do we add so much chemicals to make it grow better?”

Conventional agriculture values increasing production, yields, and labour efficiency. But over the years, Eric began to question the concept of “efficiency”. He turned to soil scientists, including Dr. Elaine Ingham, who advocate for natural, or organic farming methods that build microbiology in the soil. He attended one of Dr. Ingham’s seminars and began to learn about how microbes and nematodes work together to enhance and build structure and organic matter in the soil.

“Humans have a tendency to think that we can do better than nature,” says Eric.

Slowly, the Chens changed their farming practices over the years. While they don’t have livestock on the farm to add fertilizer to the soil, they rely on crop rotation and plant cover crops and green manures, such as rye, peas, and clover. “The different crops have unique abilities to deposit and draw nutrients from the earth. Crops can do amazing things. They fix nitrogen and deposit in the soil,” says Eric.

In the past, Eric worried that he was losing out on potential profit by turning green manures back into the soil. But today he recognizes the long-term value in feeding the soil.

“When there’s a bumper crop, or the market is saturated, there’s no harm to turn the crop back into the soil,” explains Eric. “Maybe this practice seems counterintuitive. When you grow something, you want to harvest it all. But some of it should go back into the soil. We don’t need every single leaf or fruit form that crop.” 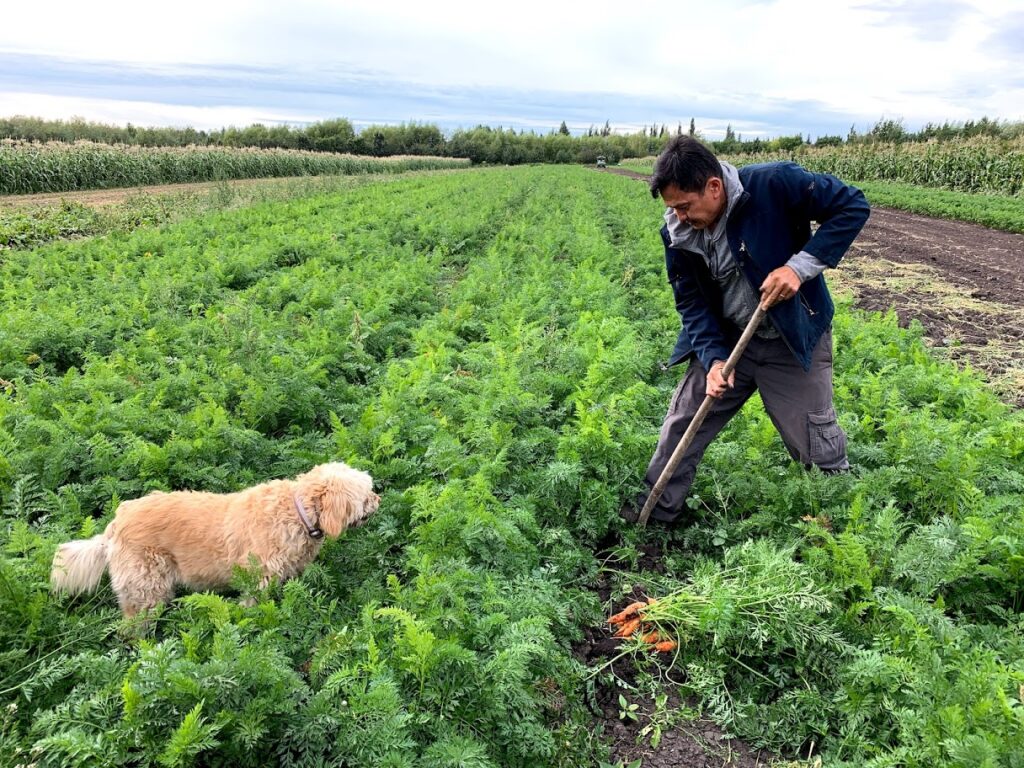 With increasingly warming temperatures and unpredictable rainfall patterns in North America – either too much, or not enough – there’s a risk for different types of insect infestations.

Is it difficult to be an organic farmer and manage insects and pests?

“Most of our crops are fairly resilient,” explains Eric. “We don’t have too many issues.”

In recent years, the potato beetles have been the most troublesome, along with cabbage worm. They rely on organic solutions, including the application of diatomaceous earth, or BT, in the case of cabbage worms. The flea beetles can be bad in the early spring months, when the crops are young seedlings, but become less of an issue after maturity.

“When you have a healthy soil and the plants are growing vigorously, these plants can also handle more environmental stress,” says Eric.

He points to research by Dr. Alyson Mitchell, a professor of food chemistry in the Department of Food Science at UC Davis in California, that has demonstrated organic farming has the potential to increase plants’ vitality and resistance to herbivores, and as a result, reduce the need for insecticide applications. There is also some evidence that a plant’s adaptation to environmental stress may actually increase antioxidants. In other words, some environmental stress is beneficial.

“If you give [a plant] a silver platter, it won’t have to work that hard,” explains Eric. “But a plant has to adapt to insects, disease, and severe weather. In the adaptation, it builds a stronger biochemistry – just like an athlete training. It’s an amazing creation, that little plant!”

Over the years, Eric has made space for “weeds” growing alongside crops and cover crops. “I find so many native plants that grow in our garden,” he says. “And some of them are good for us!”

They’re also good for the soil, he acknowledges. Take the dandelion, for example. Dandelions are one of the first flowering plants in spring, providing food and nectar for native pollinators.  Their wide spreading roots loosen hard-packed soil, aerate the earth and help to reduce erosion. The deep taproots draw nutrients, such as calcium, from deeper layers and make them available to other crops. Dandelions are an excellent natural fertilizer.

“There’s also the broad-leafed, white man’s foot (greater plantain) and amaranth,” says Eric. “They grow by themselves – you don’t need to help them.”

These ‘weeds’ are also high in medicinal properties. Eric credits the work of John and Irene Feddema, operators of Dandy Joe Roasted Dandelion Root Coffee & Teas. The Feddemas grow dandelions and process them into a variety of tea and coffee products, which they sell at farmer’s markets in Camrose and St. Alberta. 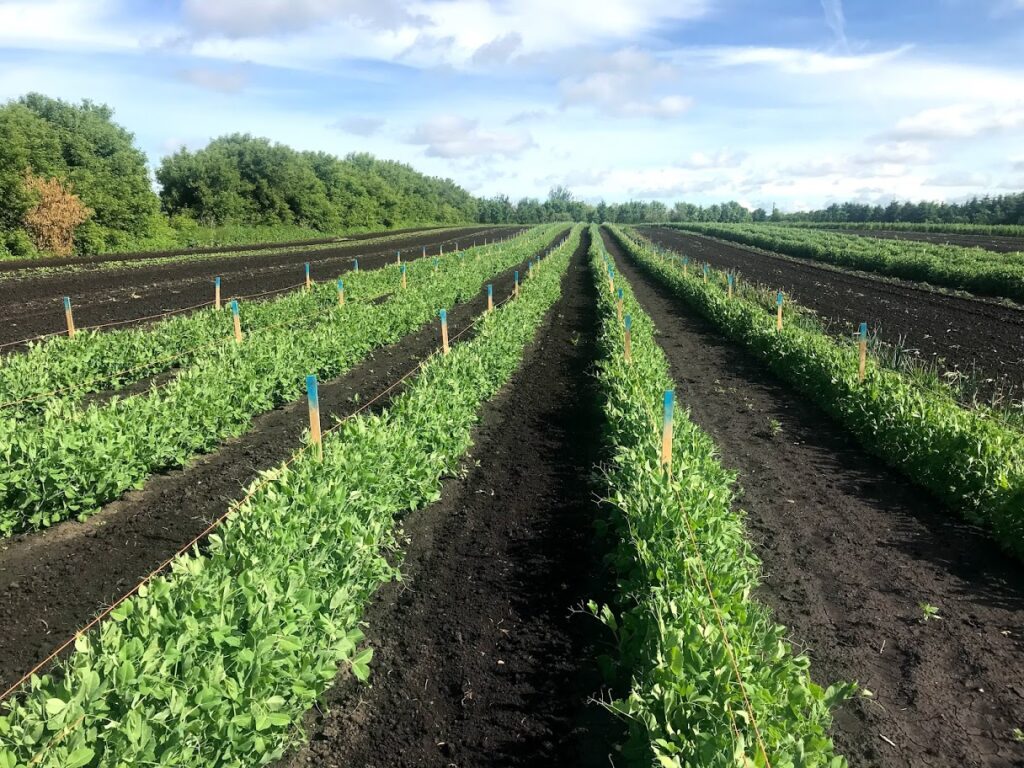 In the Face of Changing Weather – Surviving Extreme Systems

Over the past 10 years, the Chens have observed an increase in extreme weather events, including heavy rain and storms, high winds, and devastating hail events. The possibility of extreme weather systems is always on their minds, says Eric. “It’s not something we can necessarily avoid.”

He recalls two devastating hailstorm events in the last decade. In August 2013, a hailstorm destroyed the Chen’s cucumber crop. And again, in June 2017, they lost an entire crop of peas. “We’d staked everything – it looked so nice! And it was completely flattened,” recalls Eric. “We had hardly anything to sell at the market. I think the hardest thing is explaining to people why you have no produce.”

The only way to mitigate for hailstorms – other than growing indoors – is to diversify crop production. He’s observed how low-lying crops and root crops are far more adaptive and resilient to extreme weather events. While potatoes are sensitive, carrots and beets will often grow back.

But environmental stress hasn’t only made the Chen’s plants stronger and more adaptive, it’s also made their family stronger, too. After both hailstorm events, Eric remembers how devastated he felt, looking out on his flattened fields.

“When you see your whole field completely gone, you ask yourself, ‘Why is this happening to me?’” says Eric. “But it’s taught me not to overact. And secondly, to remain thankful. It taught me to be thankful that in 30 years this was the first time it happened.”

It’s not so different with the way communities are reacting to and dealing with the devastating impact of the COVID-19 global pandemic, Eric points out.

“We need to keep our hopes up and do our best,” he says.

“The real meaning of our farm – Peas on Earth – is that try to have “peace” in what we do. It’s about sustainability. For us, it’s about our farm, our family, and our community.” 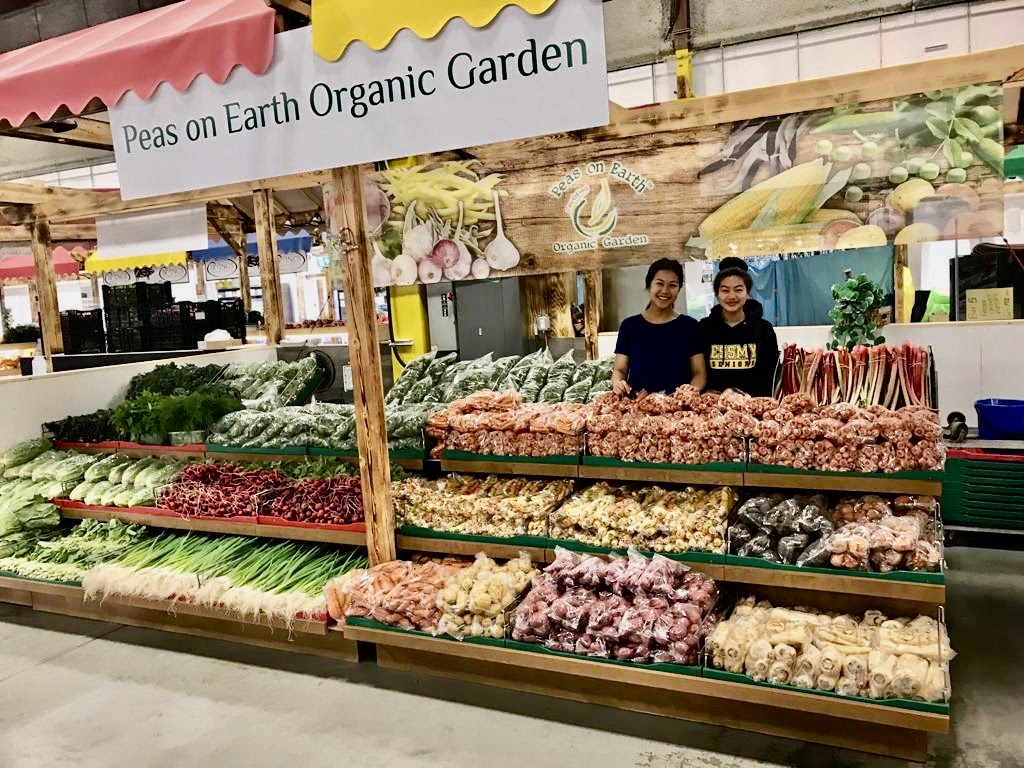 Peas on Earth Certified Organic Garden was officially founded by Eric and Ruby Chen in 2000. With their interest in sustainable and community-minded farming, Eric and Ruby combined their expertise in farming and business to create Peas on Earth. The goal – “Growing For Our Children” – signifies their operation’s goal to provide a source of health and nutrition in an environmentally conscious manner. By growing and eating organic, the Chen family believes that our community can avoid many physical and environmental issues associated with chemically treated and genetically modified foods.