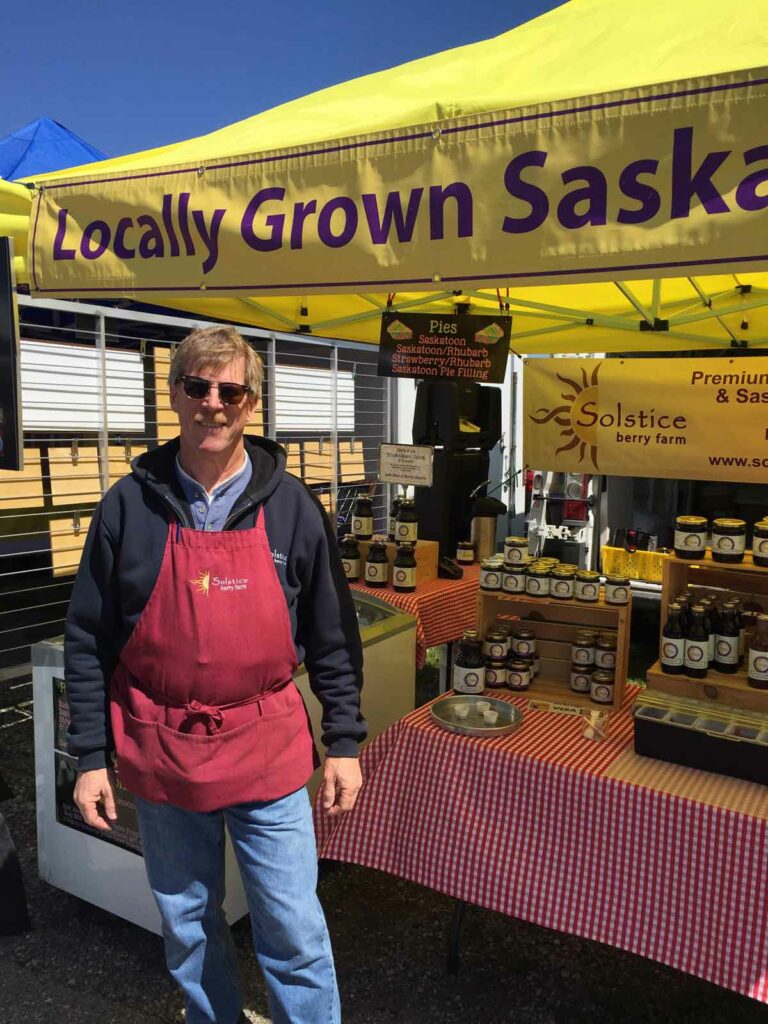 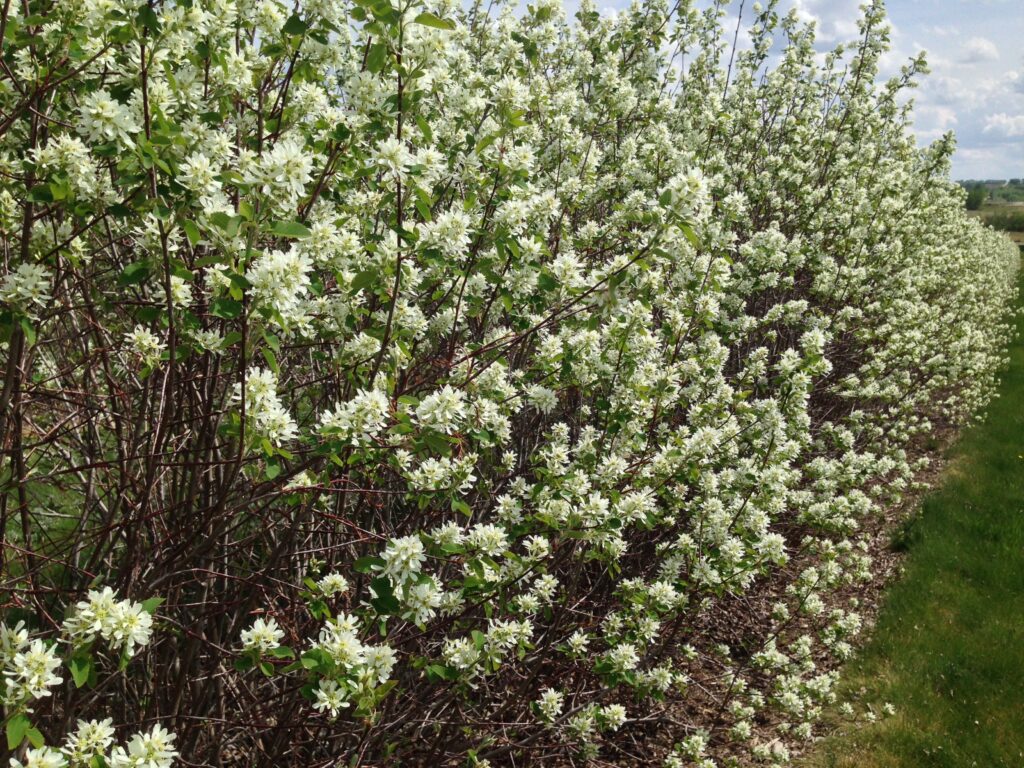 Rick and Marsha Gelowitz were brand new to farming when they bought their farm northwest of Calgary in 1994. They both worked in the IT sector in Calgary — self-described “computer geeks” — and started out on the land raising sheep and growing hay for export to the dairy industry in Japan. But as Rick recalls, when the “drought years” hit in the late 90s, the hay business felt risky in terms of unpredictable weather, and in order to grow their enterprise, they needed more land.

“We just opted to switch gears into something different to grow a higher value crop,” says Rick. “We needed more land [to grow hay], but it was too expensive in the Calgary area. So we decided, well, let’s do something where we don’t have to buy more land in order to expand. We can use what we have.”

The Gelowitz’s kept a garden on their farm where they grew several Saskatoon bushes. Rick, who grew up in Calgary, but spent quite a few summer vacations on his uncle’s farms in Saskatchewan, has had a lifelong love for the native prairie berry.

“It was my wife’s suggestion that we try to grow Saskatoons,” he recalls. “And that’s how it started.”

Marsha enrolled in the Horticulture Certificate program through Olds College, and they got started in 2003, planting 5 acres of Saskatoon bushes. The following year, they planted another 5 acres, and so on. In 2007, after the perennial berry had established, the Gelowitz’s enjoyed their first harvest.

Today, the idea has taken root: they’ve expanded their business into Solstice Berry Farm, a 40-acre orchard, managing 10 acres for a U-Pick operation and 30 acres for commercial production. The Gelowitz’s even established a commercial kitchen to process Saskatoons into jams, jellies, syrups, and pies. Today their customers can order online and they deliver to addresses in the Calgary area.

The Gelowitz’s decided to implement Integrated Pest Management (IPM) on Solstice Berry Farm. IPM is an environmentally sensitive approach that relies on a combination of practices designed to manage the life cycles of different pests and keep numbers below a threshold that’s harmful to production. For example, while they plant around 1000 bushes an acre in rows, they decided to also plant a cover crop between the rows in the orchard to reduce soil compaction and prevent erosion.

“We planted a drought resistant blend of sheep and hard fescue that we keep mowed, which improves air flow to the orchard, and also prevents the rows from becoming too muddy —especially in the U-pick area,” explains Rick. “The airflow is important for the orchard.”

The cover crop also helps to manage the growth of Saskatoon suckers — Saskatoons love to sucker, says Rick — which keeps the bushes contained to the rows. The rows are 18 feet apart and aligned north to south, which allows for equal exposure of sunlight to both sides of the rows, and gives them enough space to operate the harvesting equipment up and down the rows, while also allowing prevailing winds to move through the orchard. 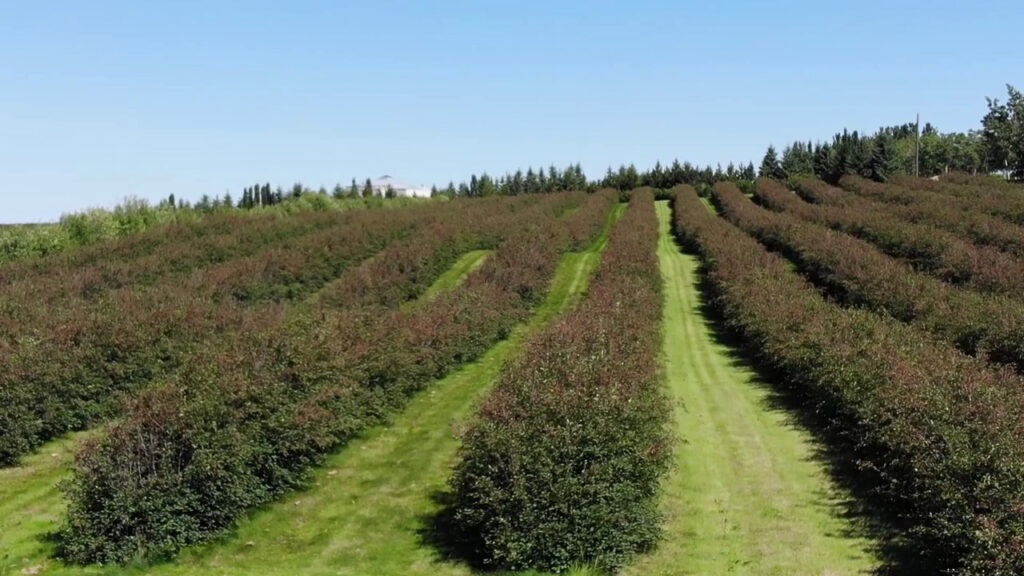 “The fact that we are fairly windy here helps to cut down on disease pressure,” says Rick. “Fungal diseases especially like hot, humid conditions to thrive, and with the winds we typically get, this helps to keep the humidity levels low which reduces fungal disease pressures.”

The Saskatoon berry harvest takes place anywhere from the third week of July to mid-August, depending on the weather. “We usually have full blossom around the 1st of June,” explains Rick. In the area designated for commercial production, they use a harvester up and down the rows that bends the branches into the machine. The harvester has a vibrating mechanism that shakes the berries off the branches and collects them onto a conveyor.

The cover crop of fescue between the rows is essential to maintaining good soil health, says Rick. “The grass helps to keep the soil together and prevents erosion.”

A Hardy Native Berry: “Perfectly Suited to a Prairie Climate”

Saskatoons, which are native to the Canadian prairies, are a part of the rose and apple family. While there are 26 Saskatoon cultivars, only around eight of those produce sweet tasting fruit suitable for eating and are the varieties typically planted in commercial orchards. The Saskatoons grown in commercial orchards are the same as their wild counterparts. Saskatoon berries are not highly bred like blueberries, so the berries you find in commercial orchards are the very same as those you will find in the wild. The Gelowitz’s chose to grow two different varieties, including Northline Saskatoons, which produces larger round berries known for their sweet taste, along with Smokey Saskatoons, a high yielding variety, producing a slightly smaller berry with a more pronounced apple flavour. Both varieties are popular for their taste and use in baking and preservation.

“The two varieties don’t necessarily produce the biggest berries in terms of size,” says Rick. “But they have a thicker skin, which is good because they don’t break apart when they’re machine harvested.”

While it can take 3 to 4 years for a Saskatoon bush to produce berries, well maintained orchards can produce fruit for upwards of 60 to 70 years. They’re well adapted to weather and climate conditions on the Canadian prairies, tolerant to weather extremes in the summer and winter, including cold and drought.

“They are well suited to handling the changes in our weather,” says Rick. “Especially around where we are, in the foothills of the Rocky Mountains, we get shocked with extreme weather events.”

In the summer of 2021, when temperatures skyrocketed above 30 degrees Celsius in Alberta for many consecutive days, the Gelowitz’s were worried they wouldn’t have a crop. But despite the heat and drought, come July, the berries were looking “amazing”, according to Rick. “I was really surprised by the crop. The quantity wasn’t the best we’ve ever seen, but I would say it was average, or slightly above average, in terms of volume,” says Rick. “The bushes were able to draw moisture from their long, deep roots.” 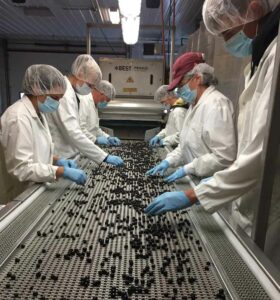 While Saskatoons are well adapted to our prairie climate, they are susceptible to a few pests and diseases. The main one is a fungal disease called Entomosporium leaf and berry spot, which causes yellow and brown lesions on the leaves and yellow spots on the berries which makes the berries unpalatable. But compared to other crops, says Rick, they require less management. “They seem to be able to handle most disease pressures, whether they’re insect, fungal, or bacterial types of diseases,” he explains. “Saskatoons seem to do pretty well all by themselves.”

The biggest climate challenge that the Gelowitz’s are facing on Solstice Berry Farm is, hands down, hail storms. Rick recalls a hail storm that hit southern Alberta during June 2020, causing upwards of a billion dollars worth of damage in the province. “It totally wiped us out,” says Rick. “In the whole orchard we harvested maybe 2000 pounds where normally we would harvest over 100,000 pounds.” He also cites frost as a potential risk to berry production. In the spring of 2016, they were hit by a bad frost at the end of May, right around the time of blossoming.

But overall, the advantages of Saskatoon production and perennial agriculture outweigh the disadvantages, says Rick, especially when it comes to soil health. “The land that we planted the berries on has not been disturbed since 2003,” he points out.

Adding Value: Processing a ‘Super Food’ on the Farm

In 2008, after local demand from their customer base, Rick and Marsha established a commercial kitchen at Solstice Berry Farm to process berries into jams, syrups, pies, and juice. In 2019, they set up an online store for people to buy their products.

“Many people don’t realize how healthy Saskatoon berries are,” says Rick. “They’re actually higher in antioxidants than blueberries, and incredibly high in fibre. A half a cup of Saskatoon berries is about one quarter of the recommended daily fibre intake.”

Growing Saskatoons is a kind of homage to Rick’s childhood summers spent in Saskatchewan. He has fond memories of his grandparents harvesting berries and baking pies. But he also acknowledges the cultural significance of Saskatoons, a native berry that is a staple in the traditional diets of Indigenous peoples in Canada, including on Treaty 7, traditional territories of the Niitsitapi, or Blackfoot, and Metis peoples. “[Saskatoons] are ingrained in Indigenous culture, not only as food, but the use of leaves, bark, and roots for medicinal purposes, or the flexible branches that were used for making bows, or arrows.”

While frozen Saskatoon berries from Solstice Berry Farm are currently sold in Co-op locations in Calgary, the Gelowitz’s are in the process of securing the licensing required to sell their berries at other major grocery stores, including Safeway and Sobeys. “We’re hopeful to get our frozen berries into a wider distribution,” says Rick.

“We’d love to see people enjoy Saskatoon berries more than they do because they’re such a great berry. Saskatoons are a healthy and delicious part of our heritage in Canada.” 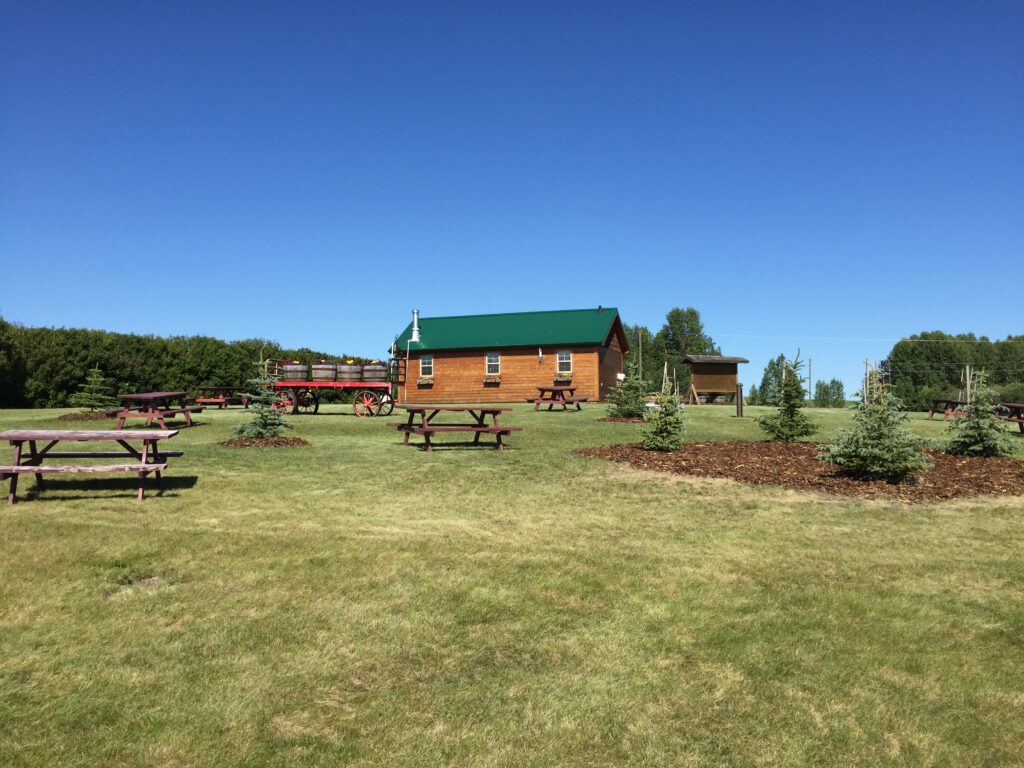 Solstice Berry Farm, located just north of Calgary, Alberta, was established in 1994 growing hay and raising lamb. Today, the farm has evolved into growing Saskatoon berries. Over the years, they have continued to grow their farm in a healthy, sustainable manner with the hopes of keeping their farm productive and sustainable for future generations.