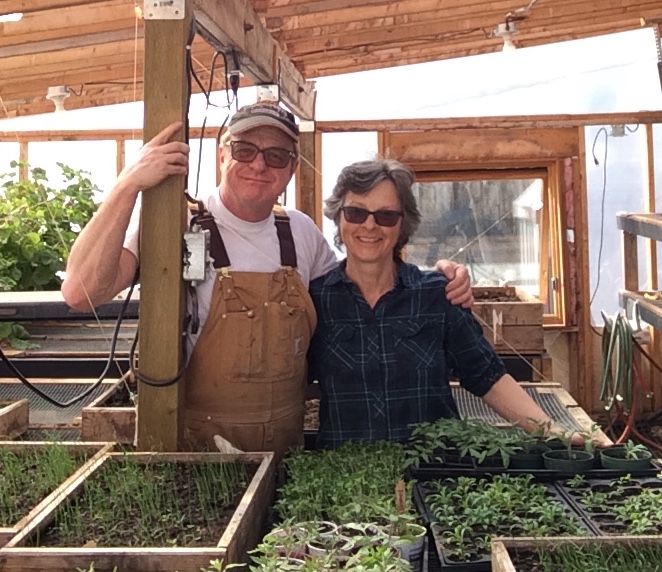 It was a longing for a “simpler way of life” that led Louise and Dan Brister to make a big lifestyle change in the spring of 2016 and move from their home in Edmonton to a 320-acre plot in northwestern Alberta. The couple came north with the goal to start a market garden operation and farm relying on holistic, natural agricultural methods. Today they run Northern Lights Fruit & Vegetable Co., growing vegetables from seed, raising chickens, and off-setting their farm energy needs by generating their own solar electricity during the long days of summer in the north. They’ve also partnered with a local honey producer, North Country Honey, to sell honey products.

“I don’t know if I’d say it’s ‘simple’ anymore,” laughs Louise. “Farming isn’t simple, but I think we’re living closer to how we’re meant to live instead of the hustle and bustle of the city.” After Louise graduated from the University of Alberta with a BSc Agriculture degree, with a focus on Crop Science, she and Dan invested in a 320-acre plot of land, 85 km north of the town of Peace River, and headed north. While Louise grew up on a mixed family farm in Alberta, Dan was a self-described “city boy” and holistic health practitioner. Nonetheless, the couple was determined to farm in the northern boreal where they found land was more accessible to new farmers.

“This property was the right one, it felt like where we should be,” says Louise.

Northern Lights Fruit & Vegetable Co. is covered in boreal forest with the Whitemud River running through the property, with several large clearings that were formerly used for cattle grazing. Dan and Louise plan to use ten acres of the cleared land for vegetable production and a future orchard. Currently, around 1.5 acres are under cultivation for the market garden and raising 60 chickens.

Louise grows a diversity of vegetables, without using pesticides or herbicides, in raised beds. They sell to the local and regional population relying on several marketing streams, including a Community Supported Agriculture (CSA) model that supplies veggie boxes to 25 families, as well as through a weekly vegetable stand in Peace River and Manning. In 2020, they were surprised to see their online sales really take off, crediting social media platforms, like Facebook, to help penetrate the local market.

“The ‘support local’ attitude has really taken off due to COVID-19,” says Louise. “People seem to want to support the local community and the people around them.” Part of Dan and Louise’s vision for Northern Lights was minimizing their impact on the environment and producing good, nutritious food as sustainably as possible.

“We wanted to minimize our carbon footprint to the greatest extent possible,” says Dan. “Solar was a very natural path, or direction to move in.”

Before leaving Edmonton, the couple took a course in Solar Energy to learn some of the basics in order to familiarize themselves with considerations and different technologies.

When designing their farm, they identified different energy needs on the land. Dan says he spent a great deal of time researching different solar technologies for specific tasks, say, running water pumps, or running electric fences, when he had an important realization.

“I realized that I was over complicating things unnecessarily,” he explains. “If we took a whole systems approach to it, we could rely on one central array to produce the power we need when we need it – instead of maintaining a number of small solar arrays all over the farm. Keep in mind that we’re tied to the grid,” he adds.

Dan and Louise installed panels on the roof of their house, completing Phase 1 of their solar program plan, which currently generates and pumps 8.7 kWh back into the grid. The system provides about 10,000 kWh annually – only 3000 kWh short of their business-related power needs.

Focusing on the one system, as opposed to investing in many smaller systems, was not only more efficient – simplifying maintenance and trouble-shooting, for example – but also more cost effective.

“It’s pretty easy to kind of figure out where the problems are, if there are any problems,” he says. “And we haven’t really had any technical problems so far.”

In 2021, their goal is to complete Phase 2 at Northern Lights, which involves moving the array to a larger building and expanding it to 14,000 kWh. The larger system will help Dan and Louise meet all of their needs on the farm and offset their use of coal-based electricity.

The couple was pleasantly surprised by the long summer days and large amounts of sunlight in northern Alberta. North of the 56th parallel, in the days leading up to the Summer Solstice, sunrise starts at around 4 AM and can last until nearly midnight. That’s nearly twenty hours of sunlight! And not only is the sunlight beneficial for their solar energy system, but also the vegetable production. “We’ve got the water resources to draw on. Combine that with the long days of summer and heat – I mean, the place is absolutely prolific!” Dan says enthusiastically. “Everything just grows and grows. I suppose that I never imagined the north to be this way.”

Adapting to weather extremes and wildfires in the boreal forest

It’s been an uphill learning curve for Dan and Louise at Northern Lights, particularly when it comes to growing vegetables in the face of unpredictable weather conditions.

Louise manages the vegetable cultivation using a variety of natural, holistic methods to best mitigate against temperature and climate uncertainties. She practices companion planting and intercropping, relies on biological controls, and enriches the soil fertility by adding manure from the neighbour’s cattle, and composted chicken manure, as well. She doesn’t apply pesticides, or herbicides, and attempts to allow for a natural balance between local pests and prey species. “We use raised beds and direct irrigation to minimize the loss of moisture and conserve our water resources,” says Louise. “It’s about doing more with less and making the resources you have stretch a little further. And also planting a little more of some vegetables, so we can afford some losses.”

Weather in Alberta’s northern boreal can be extreme. In the spring of 2019, two major wildfires broke out to the north of Dan and Louise’s farm, including the Battle River Wildfire and the Chuckegg Creek Wildfire, which caused multiple evacuations of northern communities. While they avoided evacuations, the heavy smoke from the wildfires blocked the sun and impacted the weather, lowering temperatures which impacted growing conditions – and reduced solar generation. By mid-summer, however, the pendulum swung and the region received record-breaking amounts of rainfall.

“I always look for a way to mitigate whatever is going to come,” says Louise. “Drought, or too much rain. I’m always looking for different ways to do things.”

This year, she’s eager to experiment with growing different cover crops, or green manure, around her vegetables in order to improve soil fertility and water retention.

Role of agriculture in carbon sequestration

Can regenerative agriculture play a role in benefiting the environment? Absolutely, say Dan and Louise, pointing out how farmers are playing important roles in stewarding the land, improving soil fertility, and sequestering carbon by learning about and implementing innovative and regenerative agricultural practices.

Soil health is critical to carbon sequestration. Conservation tillage, addition of green manures, mulches, plant residues left on the field, cover crops and addition of compost and animal manures are all regenerative farming techniques that result in increasing organic matter in the soil. These practices also keep the soil microbiome healthy and happy; indeed, carbon sequestration doesn’t happen without soil microbes, bacteria and fungi. They feed on the plant residues and break them down into more stable materials that trap carbon in the ground for decades – even centuries.

“There’s many net benefits to having a vibrant and active agriculture sector,” says Dan. “But it’s really about looking at practices that improve soil health and fertility.”

Dan and Louise Brister manage Northern Lights Fruit & Vegetable Co. in the Peace Country of northern Alberta. They grow vegetables from seed, raise chickens, and off-set their farm energy needs by generating their own solar electricity during the long days of summer in the north. They’ve also partnered with a local honey producer, North Country Honey, to sell honey products. Dan and Louise offer a CSA program and sell their produce online and at weekly markets in Peace River and Manning.