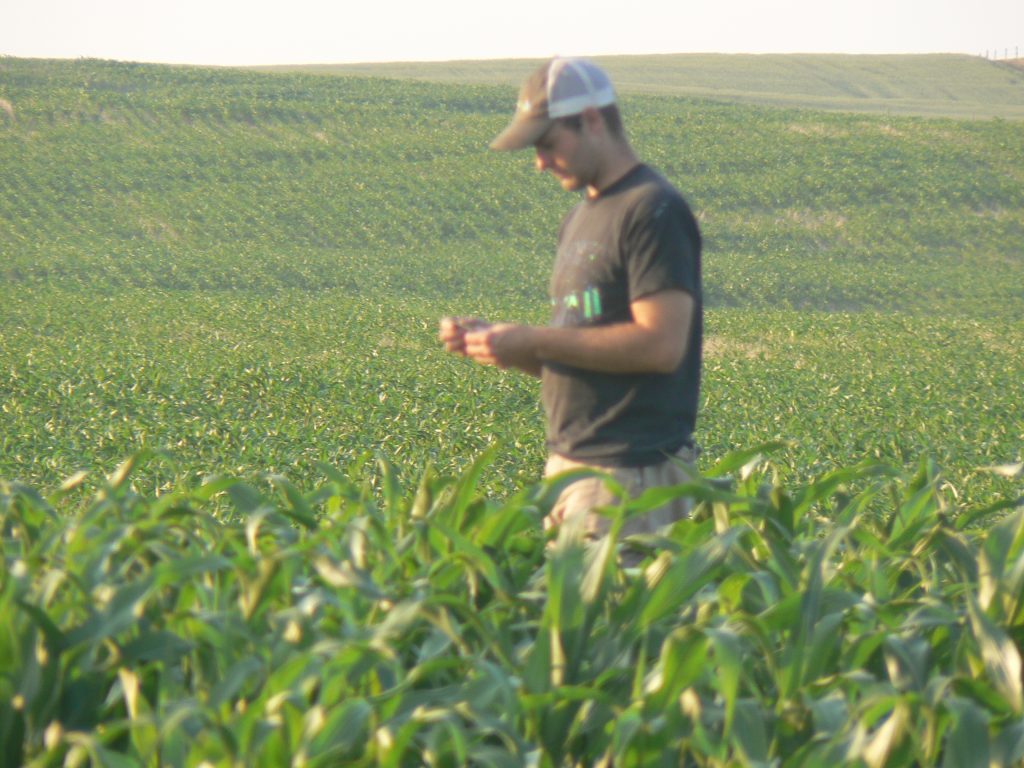 My farm is located in the brown soil zone of southeastern Alberta, near the hamlet of Hilda. It has been in my family since the early 1950s when my grandfather first purchased the land. It was formerly a mixed farm—grain and cattle. Today, my father and I manage a grain farm together, though we will probably consider integrating cattle back onto the land in the future. We are driven by a desire to correctly and effectively steward what we have been given by the Creator for however short a time we may have with the land, crops, equipment, buildings, families, and community.

The five principles of soil health are a guide for us. We believe that it’s important to stay connected with these principles to keep on the path towards improved soil health and functionality. We run stripper headers and disc drills to try to keep as much soil armor on an undisturbed soil surface. We also try to reduce our chemical disturbance by decreasing our reliance on pesticides and fertilizers through management decisions, such as seasonal fertilizer application, and avoiding the use of insecticides and fungicides. Winter cereals and longer season crops like corn, sunflowers, and flax help us to keep living roots in the soil for as long as possible. We try to stick with a diverse crop rotation, though just a rotation of monocrops is not enough diversity. Animal integration is the final pillar we are dabbling with. It is probably the hardest to implement, but we do have some young ranchers in the area that are always looking for more grazing opportunities.

Intercropping is something that I was first drawn to after reading articles about Colin Rosengren, a grain farmer who practices intercropping on his farm, Rosengren Farm, in southern Saskatchewan. Fifteen years ago, I first experimented with managing 20 acres of peas and canola, and have since tried different combinations almost every year. I have managed as much as 600 acres, and as little as zero in the years after that first try. I have experimented with different crops together and different seeding rates.

Being a dryland farm, high seeding rates in a low rainfall year is probably the biggest mistake I have made, and of course, it was the year I had 600 acres of mustard and peas. The standard recommendation on intercropping has been to go with 125 percent of monocrop seeding rates, but in my area, we need to be closer to 100 percent. For example, in my area, if a monocrop rate of peas would be 180 lbs/acre and a monocrop rate of yellow mustard would be 10 lbs/acre, we would want to keep to those levels. I would probably seed 120 lbs of peas (67 percent) and 3.3 lbs of mustard (33 percent) to still be at the same proportional plant population as a monocrop would be. Any more and we run the risk of losing a crop when it gets too dry. There hasn’t been a year that we haven’t netted more in the intercrop than in the monocrops, and it’s usually with less fertilizer and herbicide inputs.

Currently, I am looking beyond cash grain intercrops to more of a companion cropping system where we are still seeding multiple species in one field, but only one of them is harvested for grain. Cash grain intercrops can be a challenge because of maturity differences between crops at harvest and having to separate the grain afterwards. However, I have been intrigued by growing a mixture of grains for feed and leaving them blended together – but I haven’t got there quite yet. Companion crops do not have those issues of maturity and separation because (although there are multiple species in a field) only one of them is harvested. The rest are left to grow until a killing frost, giving season long living roots and potential grazing opportunities in the fall after harvest. There are still issues with herbicide compatibility with companion crops, but there are more options available depending on the species chosen. One big consideration is going to be plant height of the companions because they can still cause issues with harvest. But there can be an opportunity for introducing much greater diversity into fields with companions than intercrops.

As with intercrops, companion crops will need work with seeding rates, as the phrase ‘diversity, not density’ is important to remember. That means we need fewer seeds, but more kinds of seeds in our fields. In most of Western Canada we won’t be able to grow some of the smothering cover crops like we see in the United States where they are rolled down and planted into a thick mulch layer. We don’t have the moisture, or growing season to do that. Instead, we need to armor our soils with previous years’ crop residues, and maintain our diversity and living roots as separate goals.

Hopefully, companion crops will lead to low rate perennial companion crops in my fields, as that would be my final goal. That would be the best way to capture sunlight and carbon from thaw to freeze. The root depth and density benefits of a perennial are far more substantial than any annual crop we can establish in a single year. It also creates good grazing opportunities for fall, winter, or early spring.

One very important part of the equation is having a peer group of like minded individuals from your local and regional area whom you can bounce ideas off of. I am in a group with five other farmers and a former Alberta Agriculture researcher. It’s great to have a place to discuss these practices in a supportive, but also critical environment. They can be as formal, or informal as you wish. Today’s technology allows us to be in constant contact without needing numerous face-to-face meetings.

I’m not in the business of telling people what they should do (unless they ask), but I can still say where I’ve come from, where I am today, and where I’m hoping to get to.

After reading this, I’d say that if there were to be three things for you to remember, they wouldn’t be about intercrops or companions. Instead, I would say: be willing to try different and even crazy things, find a peer group to bounce ideas off of, and know the real reasons you are even doing this – or anything for that matter. 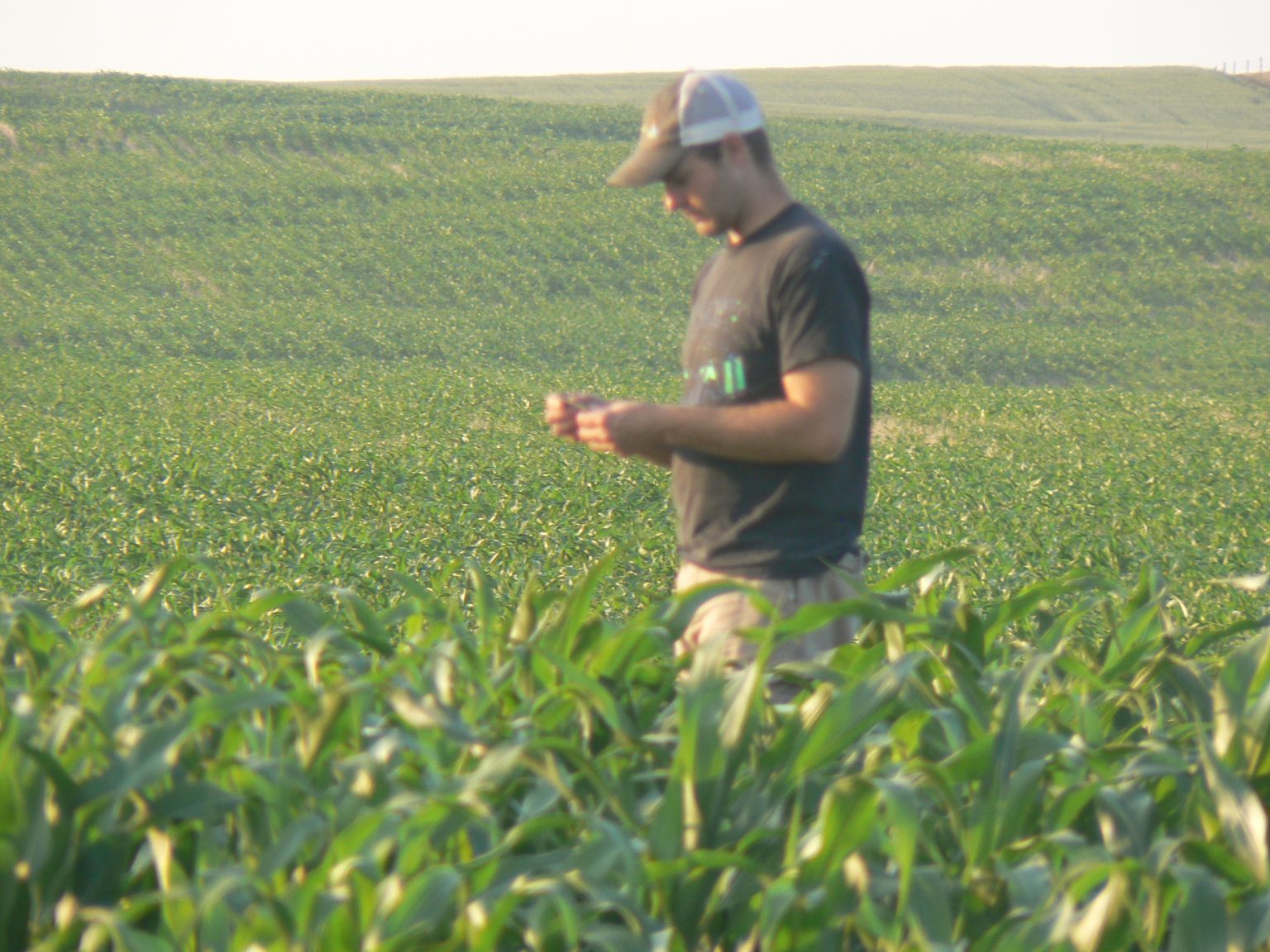 Andy Kirschenman farms with his wife, 2 kids, father, and mother on a dryland grain farm outside of Hilda, Alberta.  Being in the brown zone, moisture saving and residue preservation are the biggest challenges that he faces on his farm and are the biggest factors for decision making.  He also spends his time volunteering at Hilda Baptist Church, Pinecrest Bible Camp, within the Hilda community, and with the 670 Collective, a mountain bike club in Medicine Hat, AB.  Andy says the primary driver of the farm is to steward that which has been given by the Creator and in all things strive to bring glory to God.