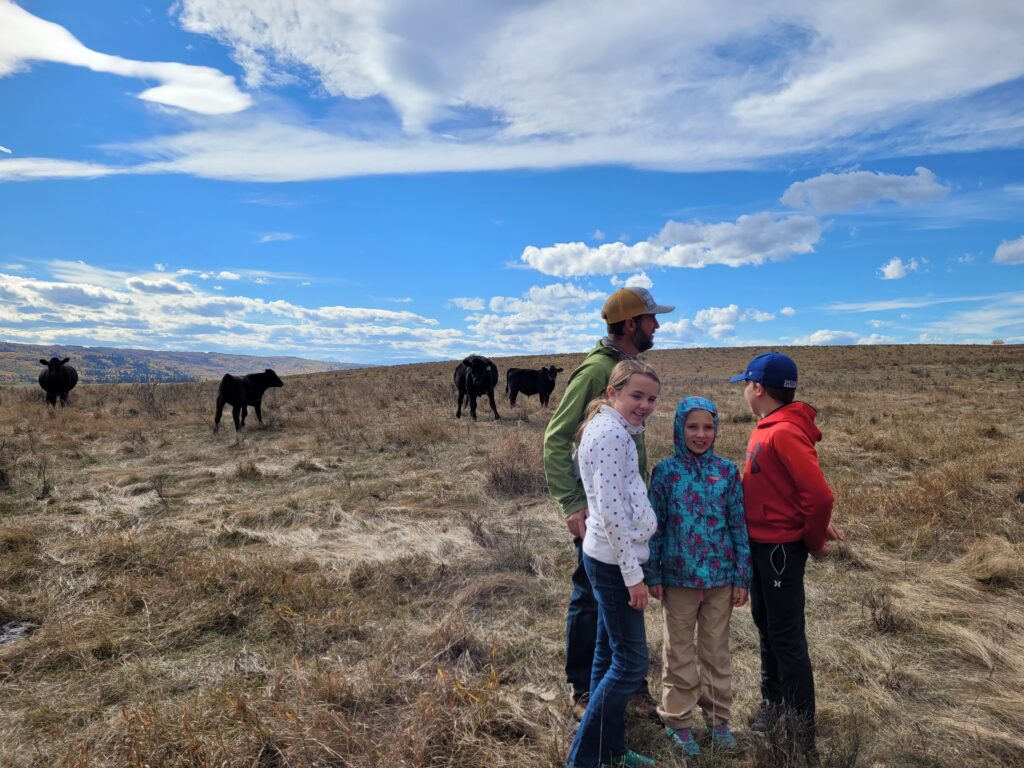 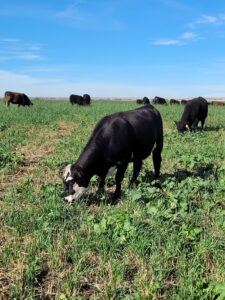 In 2015, Tim became fascinated by regenerative agriculture practices and soil health. He read anything he could get his hands on and began watching YouTube videos. When a part-time pastor position opened up at his home church in near by Airdrie, Tim and his wife Joanne decided to move their family back onto a quarter section property of the family land. “I wanted to come back to the farm and be a part of this [regenerative agriculture] movement,” says Tim.

He credits the inspiration and mentorship of his uncle, Doug Wray, who was an experienced rotational grazer, and had been experimenting with multi-species annual cropping just prior to Tim’s return to the farm. Doug recognized that careful grazing management paid dividends, noting the synergy, “What’s good for the grass and good for cattle”. But they were just seeing the tip of the iceberg. Up until that point in time, the dominant school of thought had been that when you graze the grass, the roots die off and the root matter becomes the organic base, Tim explains. But exposure to wider conversations on soil health began to shift their thinking.

“We realized that the plant is actually farming the soil, pumping carbon into the soil through its root exudates,” says Tim. “The carbon is being used by the microbes—the ecology of the soil—to do all things: build organic matter, soil structure, increase infiltration, and feed life.”

Today, Tim and Joanne manage WR Grazing in collaboration with Doug and other family members on 3000 acres of land. They are experimenting with a number of regenerative agriculture practices, including rotational grazing, multi-species cropping, and relay cropping, while integrating renewable technologies—solar and wind—to meet their energy needs on the ranch. 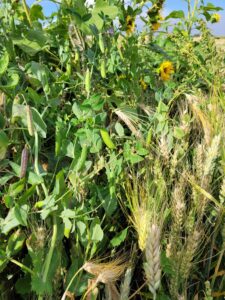 Before Tim came back to the farm, his uncle Doug had been experimenting for a couple of years with winter grazing of multi-species cropping—relying on a handful of different plants—for improved pasture and cattle outcomes. “We wanted to take what we were learning about [soil health] and push it further,” says Tim.

In 2019, they ran a series of crop trials on 20 acre paddocks to experiment with different crop mixes. On one of the plots, Tim and Doug planted a standard mix using cereals only—a barley and oats mix—and added fertilizer to help with tonnage. On the next plot, they used less fertilizer but planted five crop varieties. In the third plot, they decided to experiment by adding legumes, and the fourth they used the previous mix and added C4 plants, including sunflower, chicory, and plantain. (C4 plants undergo photosynthetic process to fix carbon in the plants). In this fourth plot, they used 28 different varieties of plants in the mix.

What were the results of the crop trials? Tim and Doug were impressed to observe that although they used less fertilizer with the multi-species mixes, they outperformed the standard barley-oats cereal mix. They also handled the weed load more effectively than the cereal mix, as well.

“People drive by our fields, and they’re like, oh, what are they doing this year? You know, because it doesn’t look like that pristine monoculture,” says Tim. “But if you can live with a few weeds, or even see that some of those weeds actually have quite a bit of benefit, you can build your soil. The advantage of cattle is that you can plant 28 species in a mix—and the cows will eat it.” 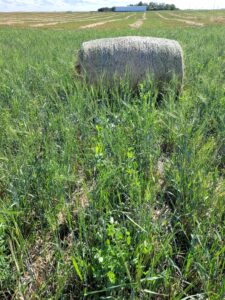 The major drought in 2018 was the worst that his uncle, Doug, could remember, says Tim, but then the heat dome that hit over the last summer (2021) (with temperatures consistently surpassing 40 degrees Celsius) had devastating impacts on ranches and farms in Alberta. Many cattle ranchers were forced to sell animals and import hay, while grain farmers suffered major crop losses.

“We hadn’t had a significant rain event since July of 2020,” says Tim. “We have been dealing with continuous drought conditions, which can hit the finances hard.”

The Wrays rely on snow runoff in the spring to fill up their dugouts for watering the cattle, but there was little to no runoff this past spring. The dugouts remained low throughout most of the summer, not only on their family farm, but on the majority of farms in southern and central Alberta.

Another climactic impact they hadn’t anticipated: wildfires. Due to the thick wildfire smoke that clogged up the skies through the summer, Tim says they had issues with their off-site water pumps, or watering stations, which are powered by the energy captured by solar panels. In order to protect riparian zones on the farm, the Wrays fence off their dugouts, and pump water out to a trough.

“It was so smoky this year, we weren’t getting the adequate solar power, which affected our batteries,” explains Tim. “At times, we weren’t able to pump water.”

As a result, they installed small windmills to generate energy from the wind to supplement the solar panels. 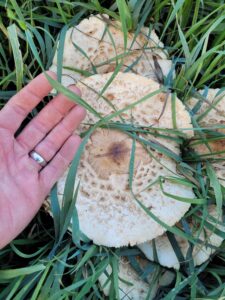 ‘A Learning Year’—Three Lessons Learned in the Face of Drought

Tim refers to the extreme drought conditions in 2021 as “a learning year” on the farm. He’s hopeful that their lessons learned will help to shape how they ranch over the next five years. Due to the drought conditions, they’ve had to learn how to adapt some of their practices.

Previously, the Wrays winter grazing regime was centred around planting a crop in late May and swathing in early September, and slowly grazing the cattle on the swath over the winter. But this year, their spring crop ripened faster than usual, says Tim, due to the extreme heat conditions. As a result, they decided to swath earlier. At the end of August and early September, it finally rained—nearly 4 inches of rain—and the understory crop took off, growing up through the swath.

“What it’s showing us is that you can really get a response out of the understory crop, especially if you harvest your over story crop earlier to give time and heat units to the understory,” explains Tim. “It effectively is creating a relay crop.”

The cattle are currently grazing on the understory crop and swath. “Even if it doesn’t feed a lot of cattle, we know it’s feeding the soil,” says Tim. If the experiment is successful, they’ll consider making it a new strategy: planting earlier in the spring to capture the longest growing days in May and June, baling in July, and allowing the understory crop to come through in the fall for grazing.

The Wrays are also advocating for the value of resting the land to build climate resiliency and drought tolerance on their farm. Tim admits that the lesson was learned through happenstance: in 2017, by mistake, one of their 20-acre paddocks wasn’t grazed a second time through the summer. The following year (2018) resulted in drought-like conditions—it wasn’t a good year for growth. But Tim observed that the rested paddock yielded twice what the neighbouring pastures did, even though they’d been managed the same for 15 years.

“It made me realize that if we can rest some of our paddocks during a good growth year, then we can capture the benefits of that during a drought year,” explains Tim.

Finally, Tim is hopeful that the development of digital collars for cattle could help make it easier for ranchers to adapt rotational grazing as a regenerative strategy. Fencing off paddocks of land and moving cattle every few days, or weeks, is costly in terms of materials and labour. Tim believes that digital collar technology—mapped out to keep cattle in and out of specific key areas, relying on GPS data input—would alleviate the costs of traditional fencing methods. The collars produce a beep, or shock, if the animal steps into an area that’s off-limits, teaching the animal where they can graze.

The benefits aren’t just financial, says Tim, but ecological. He points out how if the cattle are concentrated in one spot, ranchers can create a more efficient distribution of nutrients across the landscape. It could also help protect sensitive riparian zones, where you don’t want cattle.

“Imagine a herd of cattle moving with GPS precision across the landscape. It would limit overgrazing, the regrowth would be faster, the diversity would be better, and the utilization would be higher,” Tim says enthusiastically. “They’re currently working on it, but I can’t yet find anybody who will sell me one.” 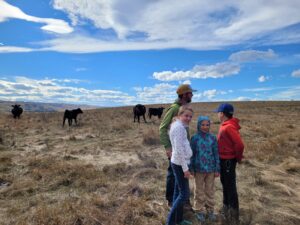 Working Together to Build a Regenerative Agriculture System

Tim’s biggest hope for the future at WR Grazing is that, one day, he’ll be working collaboratively with other farmers and ranchers who share a common goal for regenerative agriculture and soil health. He acknowledges that it can be difficult for farmers to experiment, especially in the face of extreme weather events, given that profit margins are so tight in agriculture.

Tim is interested in finding ways to collaborate with other like-minded farmers to share resources, ideas, to help alleviate the financial risks of experimenting on the land.

“Five years from now, I hope that someone is interviewing me because I’m a part of this conglomerate of farmers who are moving regenerative practices ahead by sharing risk, knowledge, capital, products, and maybe even the value chain to market them,” says Tim.

He believes that it’s not only important to build biological regenerative practices, but to develop a regenerative system that also includes the wider society and economy.

“It’s a much bigger picture,” says Tim. “Five years from now, I sure hope we’re on that path.”

Tim and Joanne Wray manage WR Grazing, a cattle ranch set on a quarter-acre property, in collaboration with family members on 3000 acres of land in Irricana, Alberta. They are experimenting with a number of regenerative agriculture practices, including rotational grazing, multi-species cropping, and relay cropping, while integrating renewable technologies — solar and wind — to meet their energy needs on the ranch.