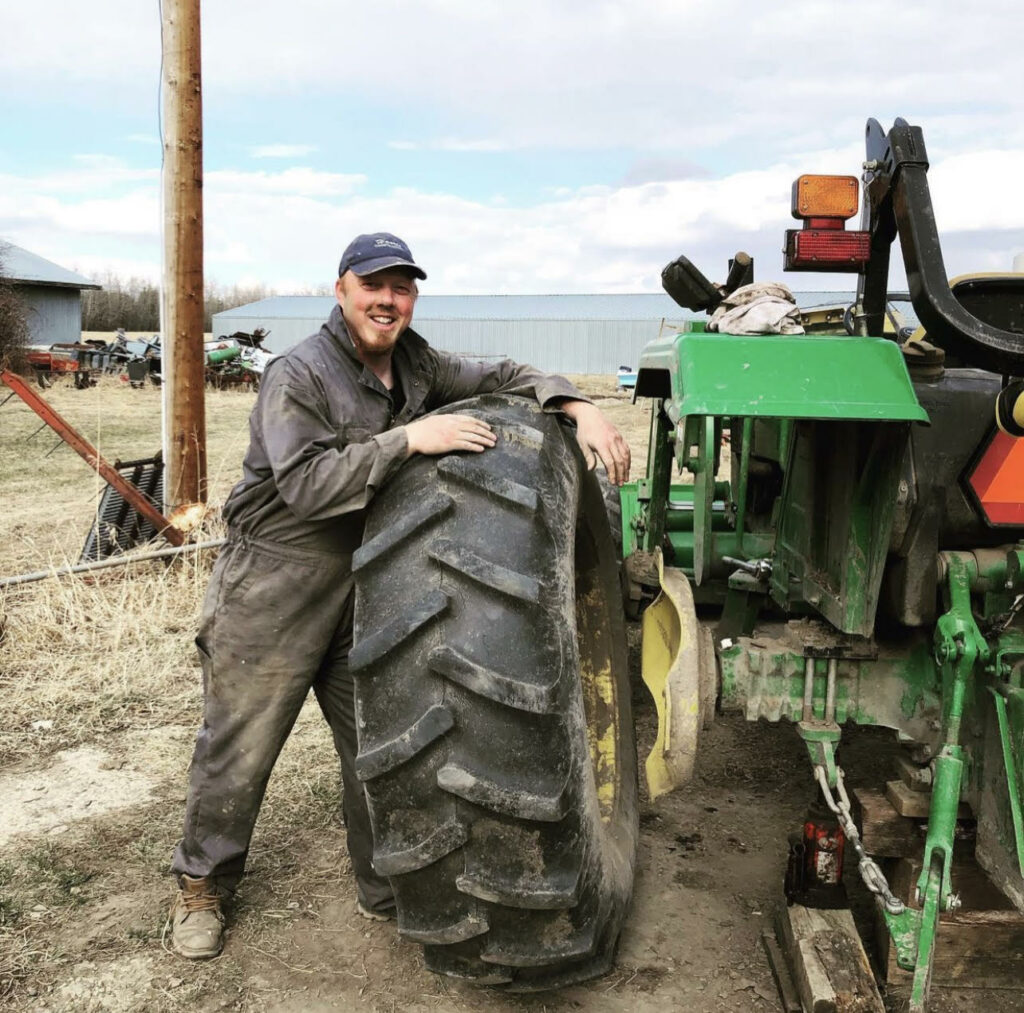 Ryan Mason transitions a successful urban farm operation back to his rural roots in Pigeon Lake, Alberta. He shares more about the challenges and rewards of scaling-up into a rural farm, and how his passionate team of young agrarians are farming with the climate in mind 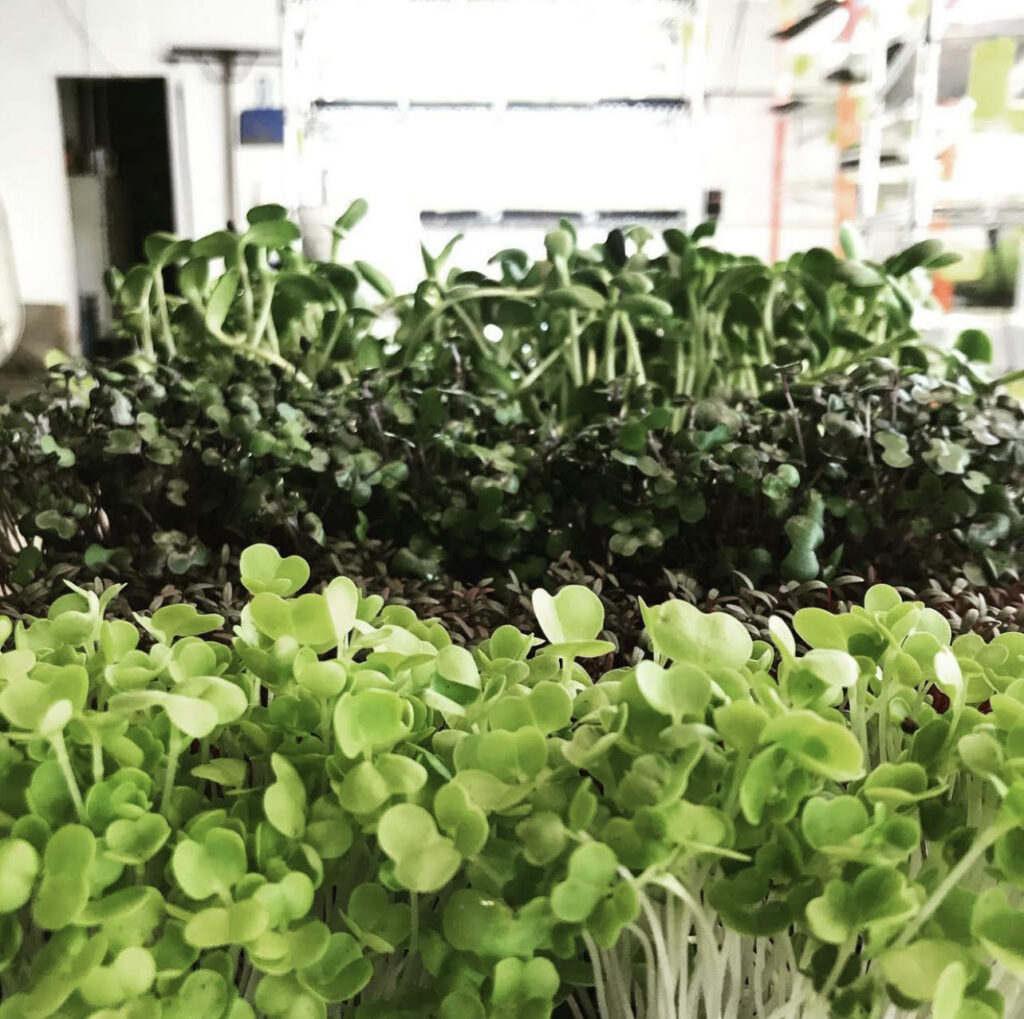 Ryan Mason, owner of Reclaim Organics, a certified organic vegetable and herb farm in Leduc County, spent most of his twenties traveling the world studying agriculture and food systems. He travelled across several continents, working alongside campesinos in Mexico and wakulimu (small farmers) in Tanzania.

But Ryan’s roots on the Canadian prairies travel even deeper. He spent the first eighteen years of his life on his family’s farm — a small-scale chicken operation — in Pigeon Lake, Alberta. Ryan has fond memories of growing up on the farm, helping feed the chickens, and picking raspberries with his brother. After graduating from high school, Ryan pursued an undergraduate degree in global development studies at Augustana University in Camrose.

“It was there where I rediscovered my passion for food and food studies,” he says.

Through his studies, Ryan participated in a global exchange program in rural Mexico, living and working with a campesino (small farming) community. In return, Mexican students also came to Canada to learn about agriculture on the Albertan prairies. This opened Ryan’s eyes to learning hands-on about different food systems and ways of producing food around the world.

Two years later, Ryan went back to university to pursue a Master’s in Environmental Sociology. His thesis research took him to an arid region in central Tanzania (East Africa) to study food systems and food insecurity. He also traveled to the island nation of Cuba to learn about urban agriculture and high-intensive vegetable production. It was during this time that Ryan met fellow classmate, Cathryn Sprague, who was also doing academic research on food security.

“We both wanted to get into farming as a way to contribute to bettering the food system,” says Ryan. “Reclaim Urban Farm was born out of that.”

In 2014, Ryan and Cathryn began searching for under-utilized land in Edmonton to reclaim and grow food. Their first plot of land was located in the heart of the Garneau neighbourhood. Eventually, they were growing food on 1-acre of land spread out on multiple plots throughout the city. Four years later, Reclaim Urban Farm produced vegetables and micro-greens for more than 40 restaurants, to retailers, CSA-members, and at the City Market downtown. They even helped lobby to change city bylaws to make urban farming more accessible in Edmonton. Ryan and Cathryn’s work in food security earned them an Innovation Award at the University of Alberta.

In 2018, after Cathryn moved on from Reclaim to pursue other projects, Ryan began to envision taking the urban operation back to his family’s farm in Pigeon Lake. “I was interested to scale up to practice a model of agriculture that would grow food for a wider population,” says Ryan. After years of traveling and urban farming, he’d finally come home to his rural roots. 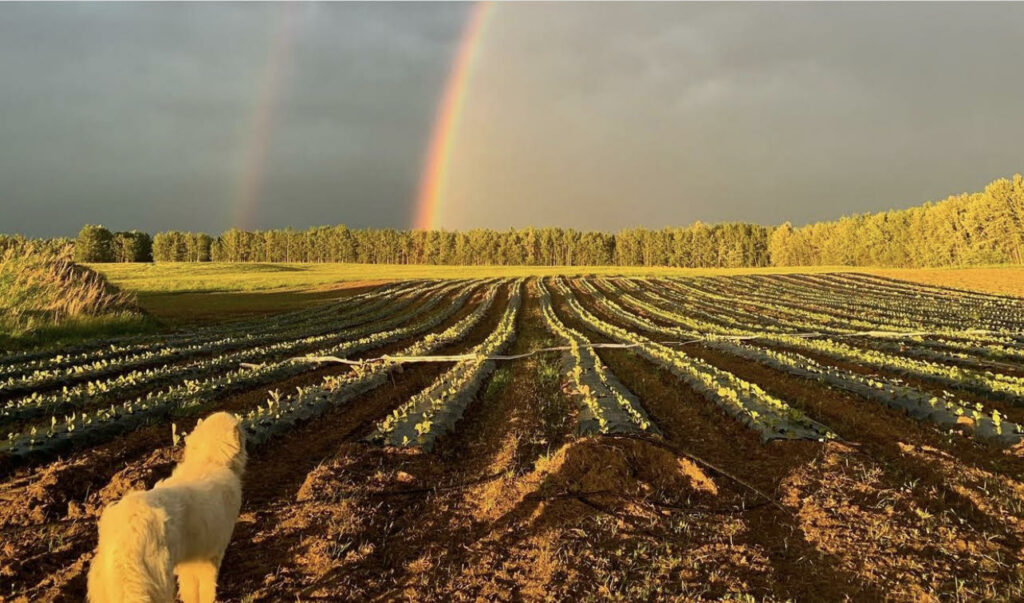 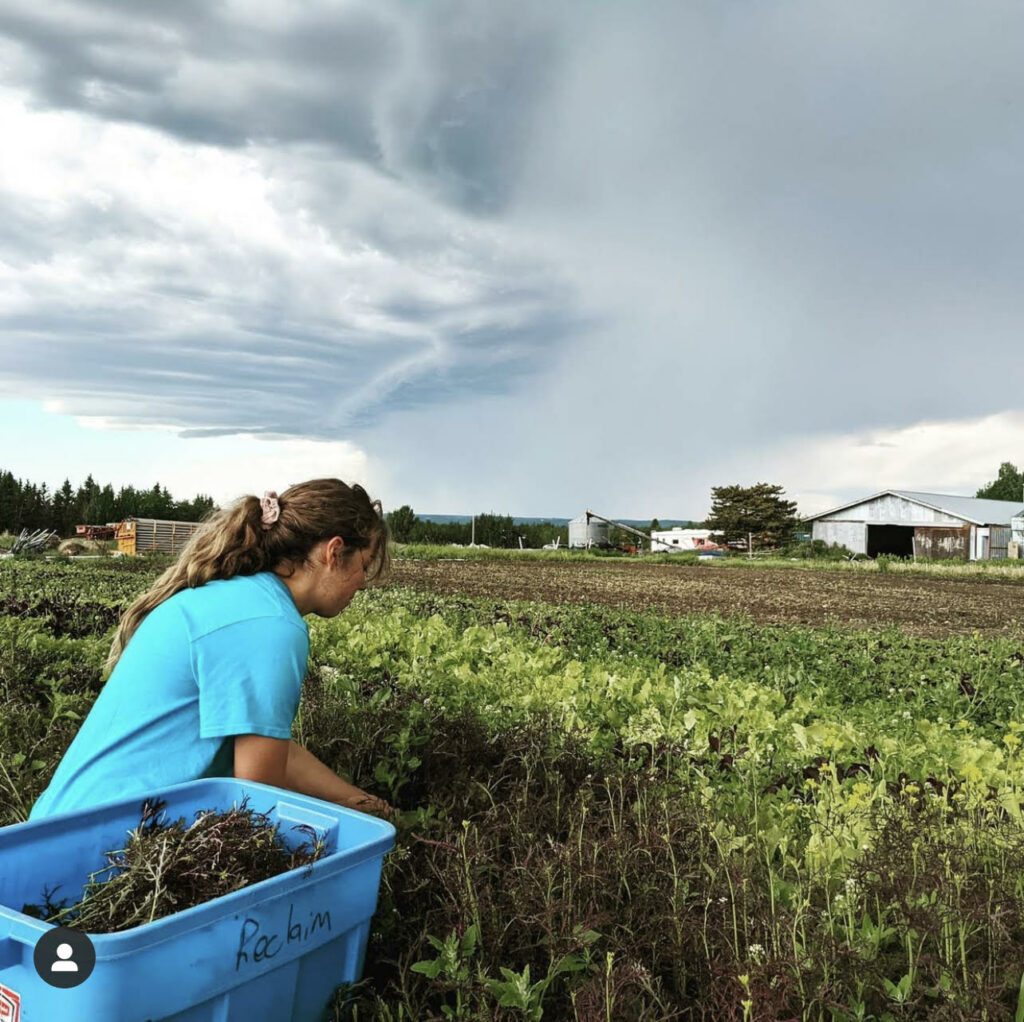 First Year on the Farm — Hard Lessons in “Scaling Up”

It wasn’t an easy feat to move an urban growing operation to a rural one, admits Ryan. The first year at Pigeon Lake had many challenges in store for the young agrarian, related to soil, systems, and access to amenities, including water, electricity, garbage disposal — even Wifi. The largest hurdle in the transition had to do with scaling up. Ryan’s land base increased from 1-acre’s worth of scattered plots in Edmonton to 6-acres, consolidated in one field.

“It was a bit crazy, actually, in the sense that it gave us so much opportunity to scale up and maybe too much, too fast, to make it work well,” says Ryan. “Also, we were starting from scratch again. All of our systems — primarily irrigation systems — weren’t compatible.”

In the city, he’d had access to water everywhere. But on the farm, the ground well wasn’t providing enough water to irrigate crops, so they had to build a dug-out, an expensive but essential investment that cost upwards of $30,000. He also had to upgrade water pumps, as well.

Ryan also faced challenges related to soil and weed pressures. The land had been used for conventional grain for decades, and as a result, some of his first crops were outcompeted by wild oats. He ended up having to till under several acres worth of crops. “Our plan kind of went askew,” says Ryan. “But any location is going to change your growing environment.” He and his staff adapted by covering the wheat with mulch and laying down plastic culture to suppress the weeds.

“I had great staff,” says Ryan. He credits their enthusiasm and support for helping to overcome the hurdles of the transition from urban to rural.

In addition to the field crops, Ryan and his team slowly converted the old chicken barn into an indoor growing space. This, too, proved challenging and required financial investments to seal off the barn and adjust temperature and humidity levels to get the growing conditions just right. 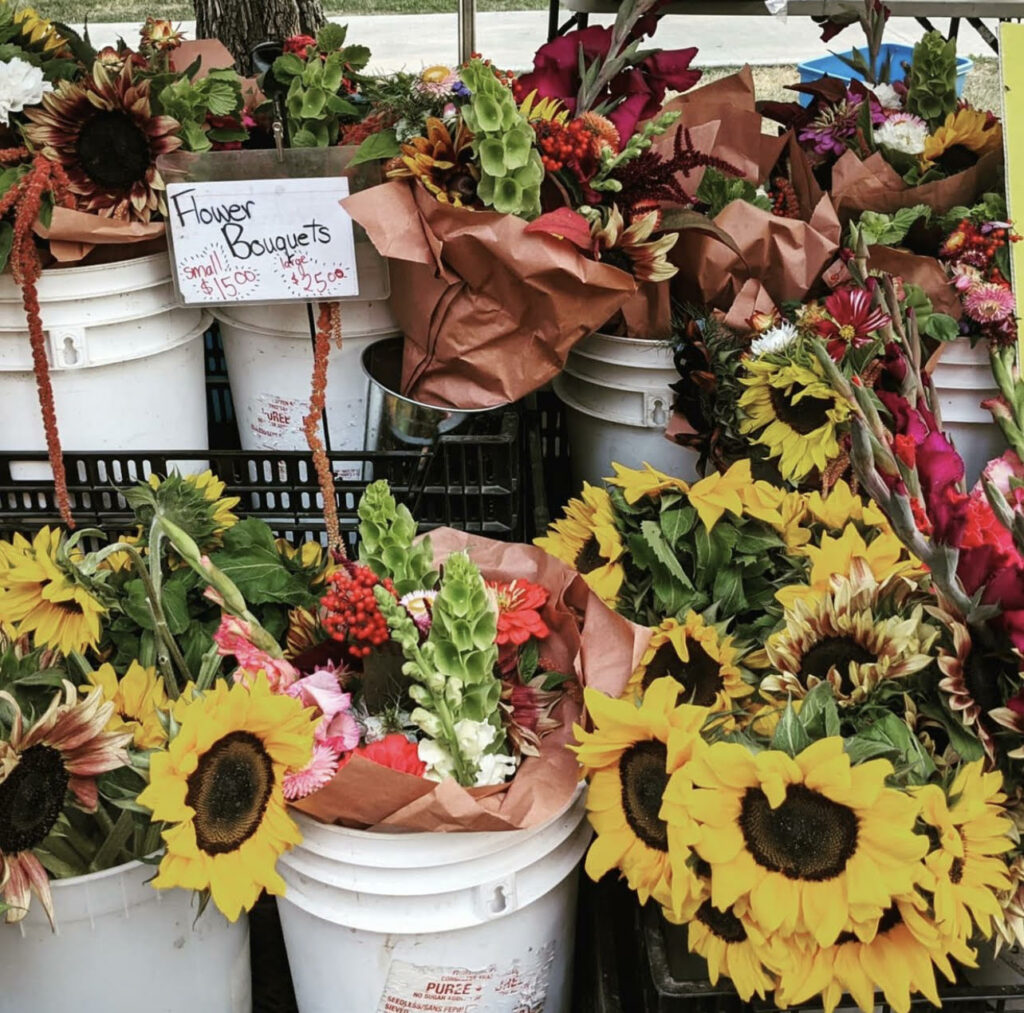 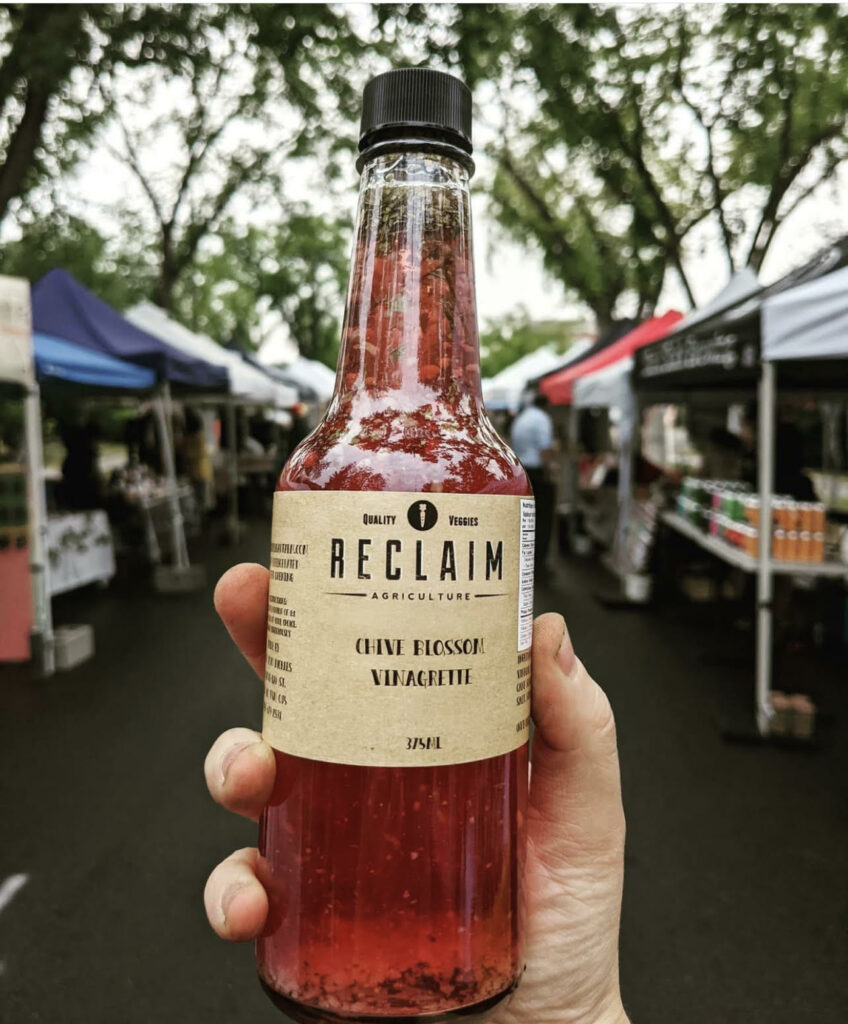 The hard work and investments in cash, labour, and time to transition from urban to rural is paying off. Today, Reclaim Organics is “one farm with multiple enterprises.” Ryan and his team produce over 80 different field crops, including cabbages, kale, potatoes, beets, carrots, tomatoes, peppers and herbs on 11-acres of land. They supply to retailers, markets, and restaurants in the Edmonton and Leduc area.

An indoor operation allows Ryan to grow micro-greens, year round, which he sells primarily to restaurants and retailers, although the COVID-19 pandemic — and closure of restaurants — reduced their sales by around 50 to 60 percent.

“On the other hand, demand for local food went up as a result of COVID-19,” says Ryan, “So our field crops sold more and everything sort of balanced out.”

In addition, Reclaim sells cut flower bouquets at farmer’s markets and retailers. Five years ago, they also started experimenting with canning. Recently, they partnered with Mojo Jojo Pickles to co-pack over a dozen different products, including pickles, relish, ketchup and vineagrettes.

“We’ve almost doubled our products every year,” says Ryan. “Last year we sold around $10,000 worth of canned goods — which is great.” 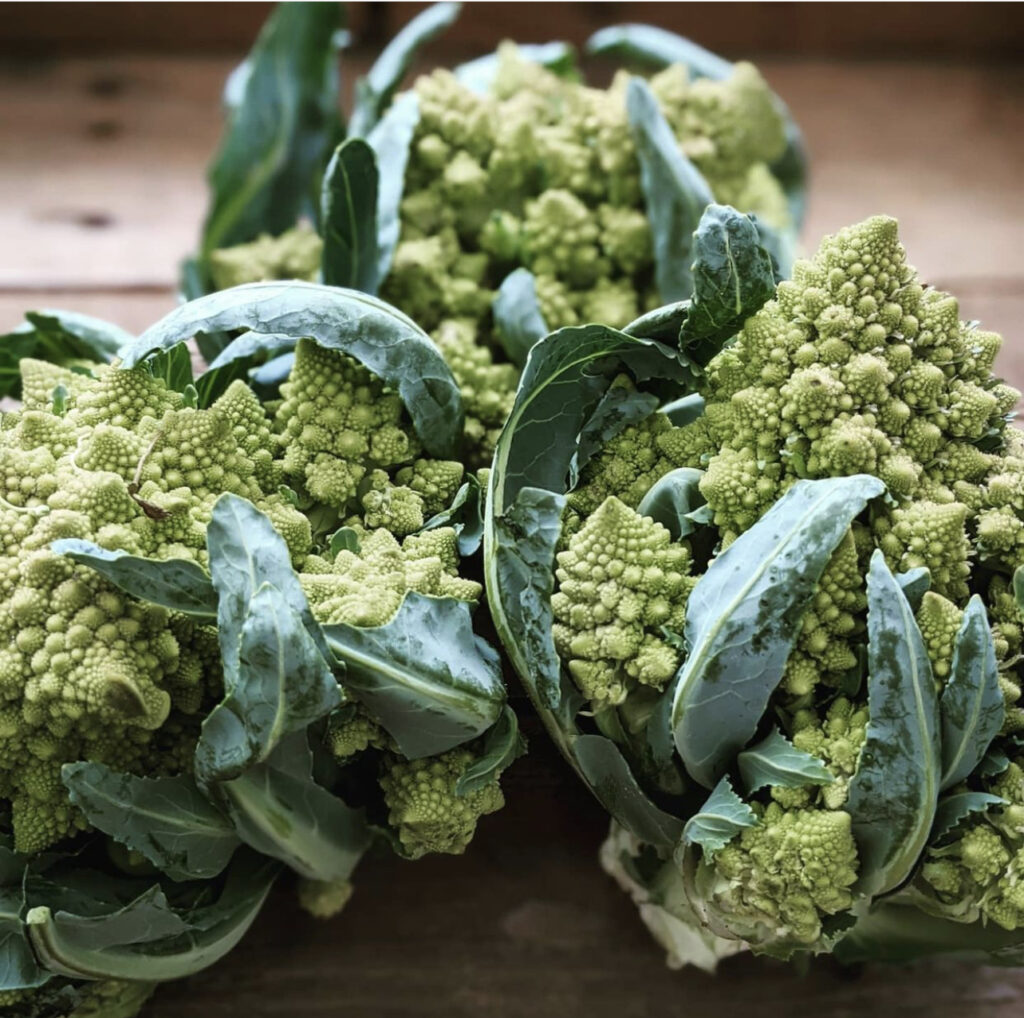 Farming with the Climate in Mind

Reclaim used to be focused on developing under-utilized land in the city, but what hasn’t changed is the desire to create healthy farm ecosystems, relying on natural and organic methods.

Everything starts with building and maintaining healthy soil, says Ryan. Reclaim Organics is a certified organic operation — extending from the field crops to flowers to indoor growing operation. “Being certified organic has given us a greater sense of a greater appreciation for the larger industry,” says Ryan. “There is an accountability component to what we’re doing.” After experiencing his first extremely hot, dry summer in 2019, Ryan decided to build ‘climate change’ into the way they plan, plant, and produce food at Reclaim Organics.

“No matter what, climate change will come into play,” says Ryan. “The last years we’ve faced intense flooding. It can also be extremely hot — say, 20 days of 25 degree Celsius weather. We need to plan ahead to find ways to cope with [climate change].”

As a result, Ryan and his team are relying on a mix of regenerative agriculture methods combined with mechanical solutions. For example, last year they invested in large hoop houses for growing field vegetables, measuring 240 feet long and 30 ft wide. The houses help to mitigate the negative effects of extreme weather. In addition, they’re growing crops in raised beds to help with drainage and to prevent flooding. 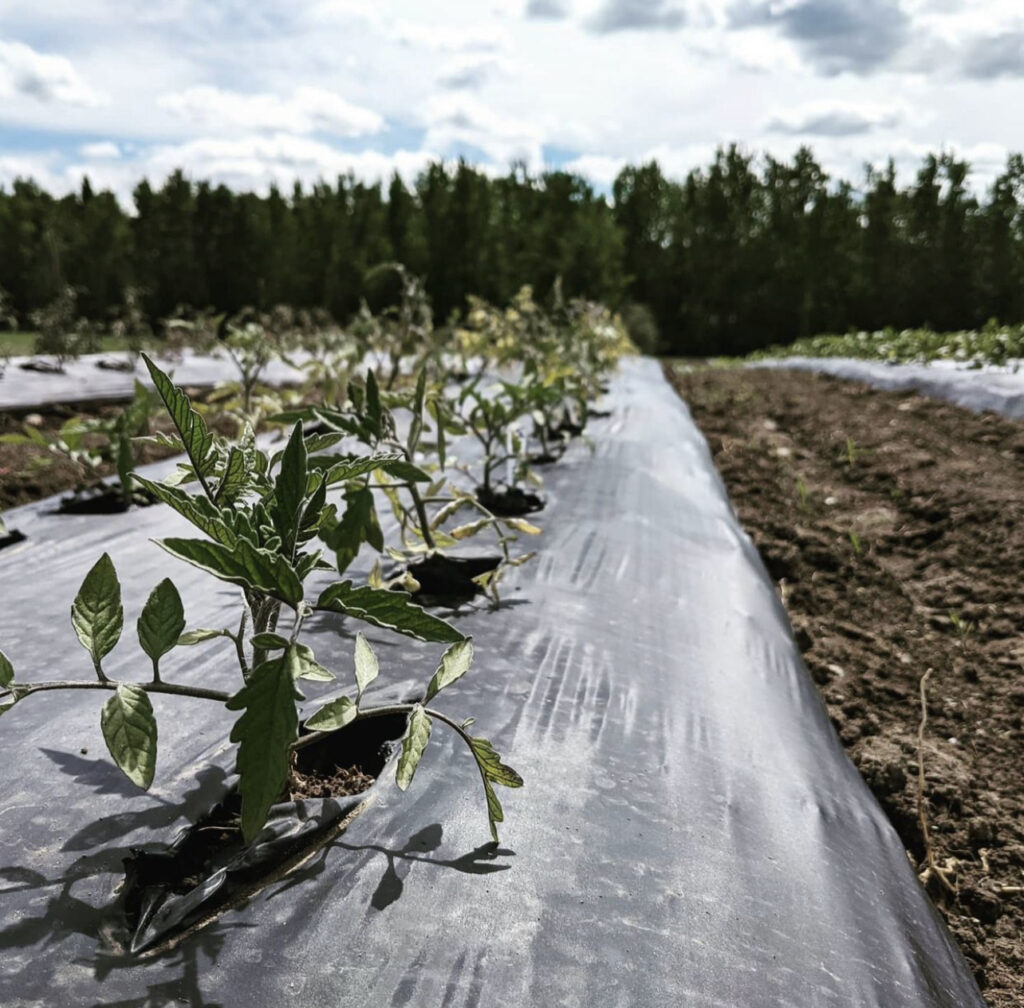 Ryan grows most of his field vegetables relying on “plastic culture” — a growing practice in Canada which involves the application of a plastic cover over planting rows. The plastic helps to reduce weed competition. But it also has other advantages. The plastic serves as a mulch, helping to keep moisture in the soil, and overall, reduces the amount of water needed for irrigation.

“We want to benefit the environment beyond our business. We’re trying to leave the land better than we found it, but because we’re farming from with natural methods there are many environmental challenges,” explains Ryan. “So this is where I might differ from other sustainable, or regenerative farmers. Everyone talks about the importance of soil and fungal activity — I don’t think anyone would disagree with that. But I’ve found it’s challenging to balance these aspirations of farming with actually making a living off of the land.”

The use of plastic culture in organic agriculture systems is somewhat contentious, admits Ryan. But he sees it as a necessary tool on his land to successfully grow food, and beyond that, create a sustainable farm model.

“How can we create a system that both improves the land and also ensures that we can pay our staff fair wages? It’s not just the sustainable ecology, but the sustainable economic and society,” Ryan points out. “We’re always trying to find that balance.” 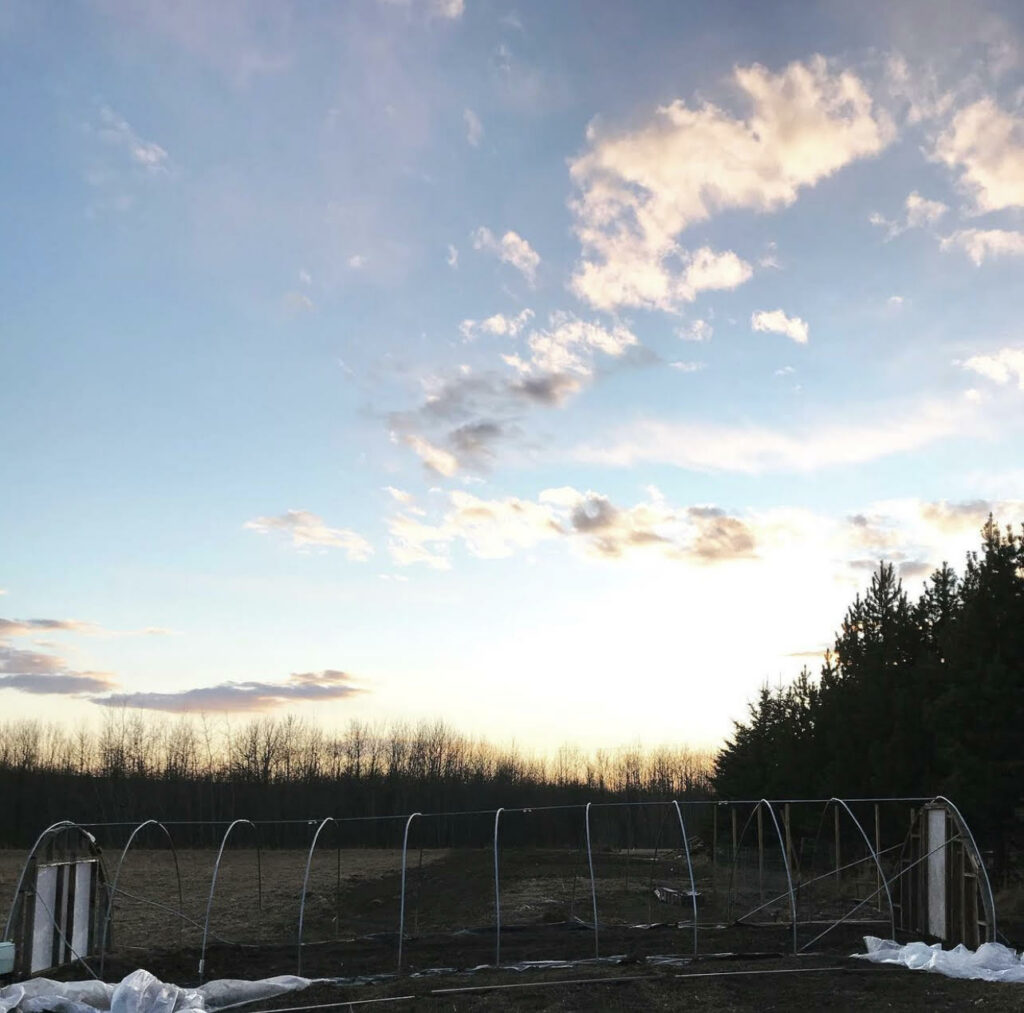 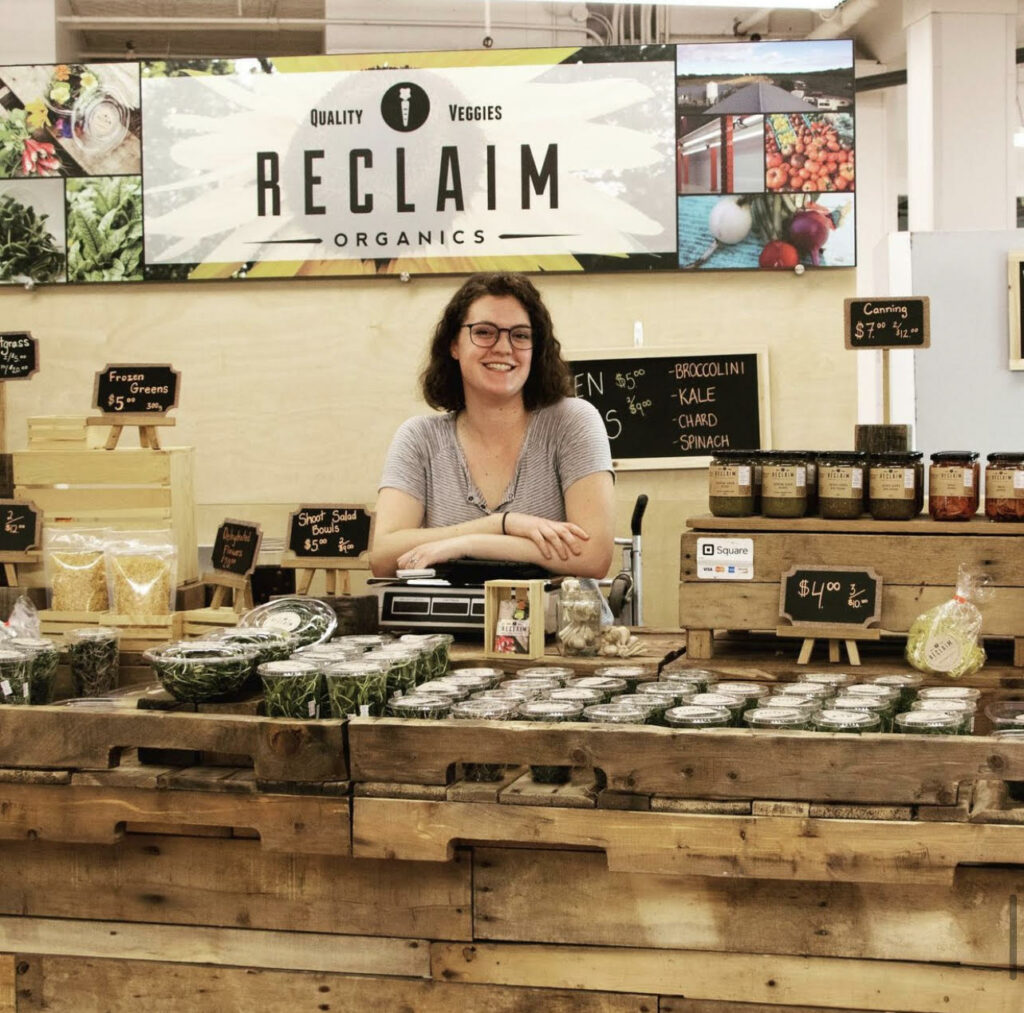 Advice for farmers transitioning from urban to rural

For those urban farmers aspiring to follow in the footsteps of Ryan and upscale and expand their operations to a rural location, Ryan urges them to go about it slowly. There are many factors to consider, he says, including access to markets and networking opportunities.

One of the hurdles of farming in a rural community, of course, is reduced access to marketing, sales, and network building opportunities. Now Ryan faces a 2 to 3 hour round-trip to get his product to market. As a result, he’s invested in a refrigerated cube van to deliver their products from Leduc County to various locations and markets in Edmonton.

Marketing hasn’t been an issue for Ryan, but he credits the foundational success of starting out as an urban operation and gaining customer support and strong markets.

“In the city, what was unique was the community surrounding us,” Ryan says. “The homeowners and restaurants — it was all more accessible. We could just pop into a restaurant and chat with owners, or attend networking events. As a business we quickly created stronger markets.”

Whenever young farmers ask Ryan for advice, he talks about the importance of marketing. “We spent 50 percent of our time marketing in the first year,” he admits. “Growing vegetables is one thing, but creating a strong brand and marketing plan is even more important.”

Despite the challenging hurdles involved with transitioning to rural, Ryan is proud of what he and his team have accomplished at Reclaim Organics over the past four years.

“It’s nice to be back on the land where I grew up,” he says. 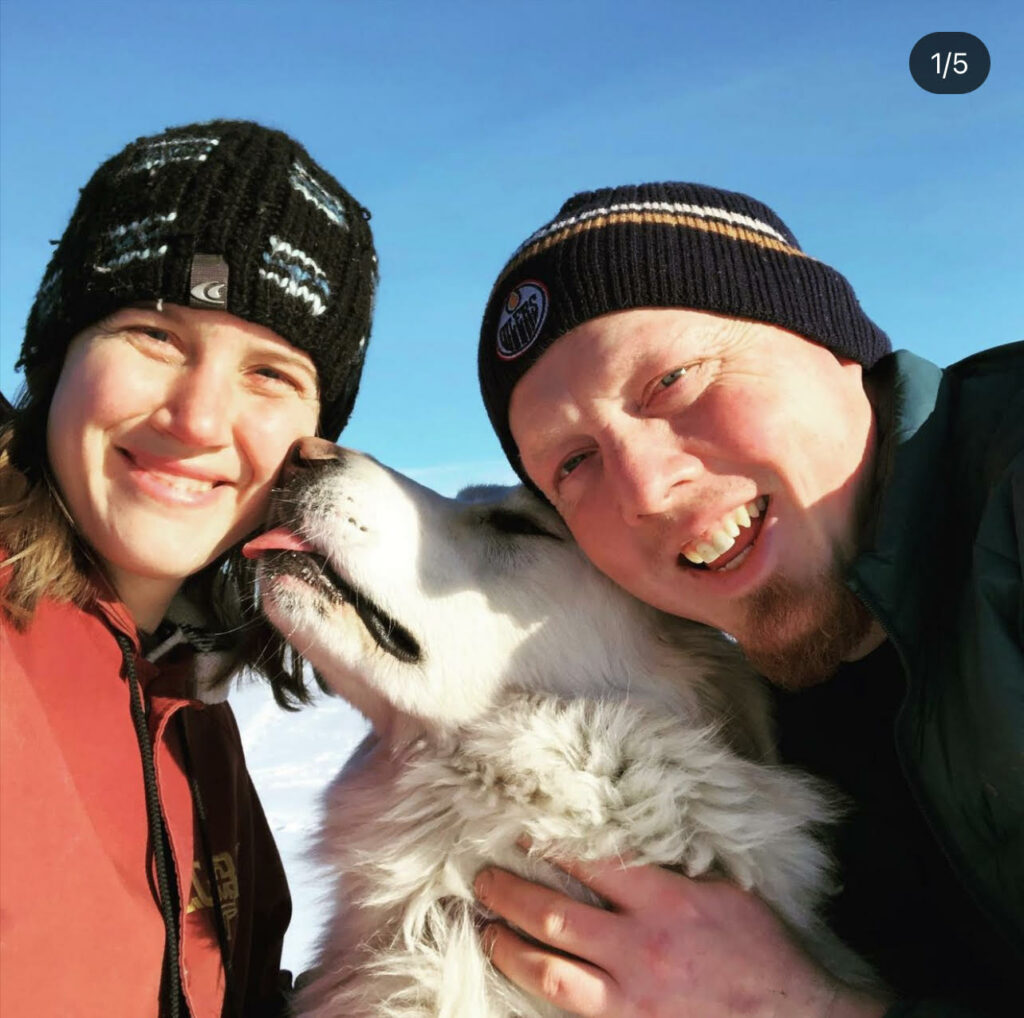 Reclaim Organics, managed by Ryan Mason and a team of passionate young agrarians, is an organic vegetable, herb, and microgreen farm on the shores of Pigeon Lake in Leduc County. Reclaim began as an urban farming initiative in Edmonton and transitioned to a rural operation in 2018. Reclaim is a certified organic farm that grows delicious micro greens and sprouts year round. They also grow seasonal salad mixes, unique varieties of greens, radishes, beets, carrots, and squash.

Find their organic produce at the Edmonton Downtown Farmers’ Market, at Earth’s General Store, Blush Lane and online at spud.ca