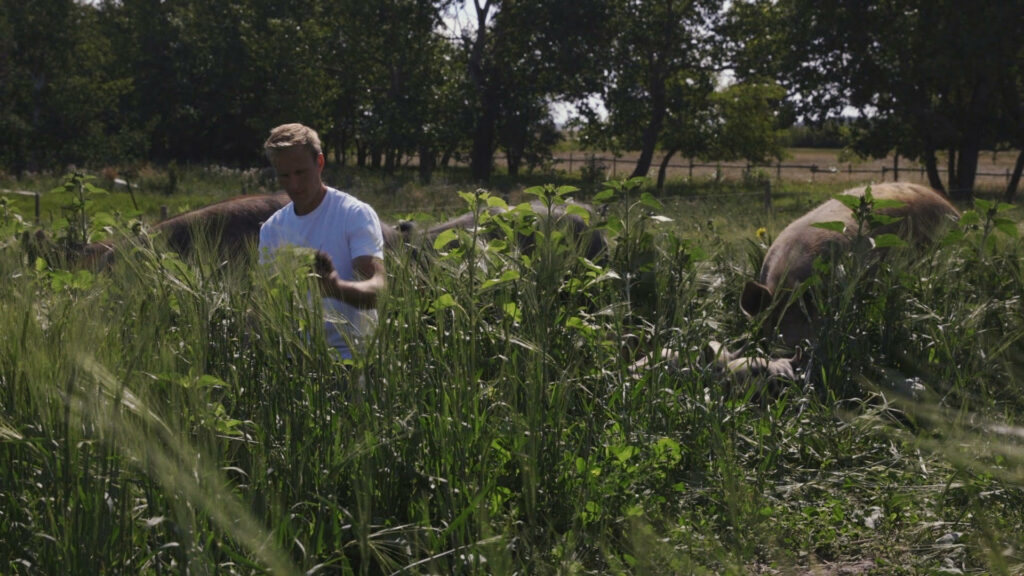 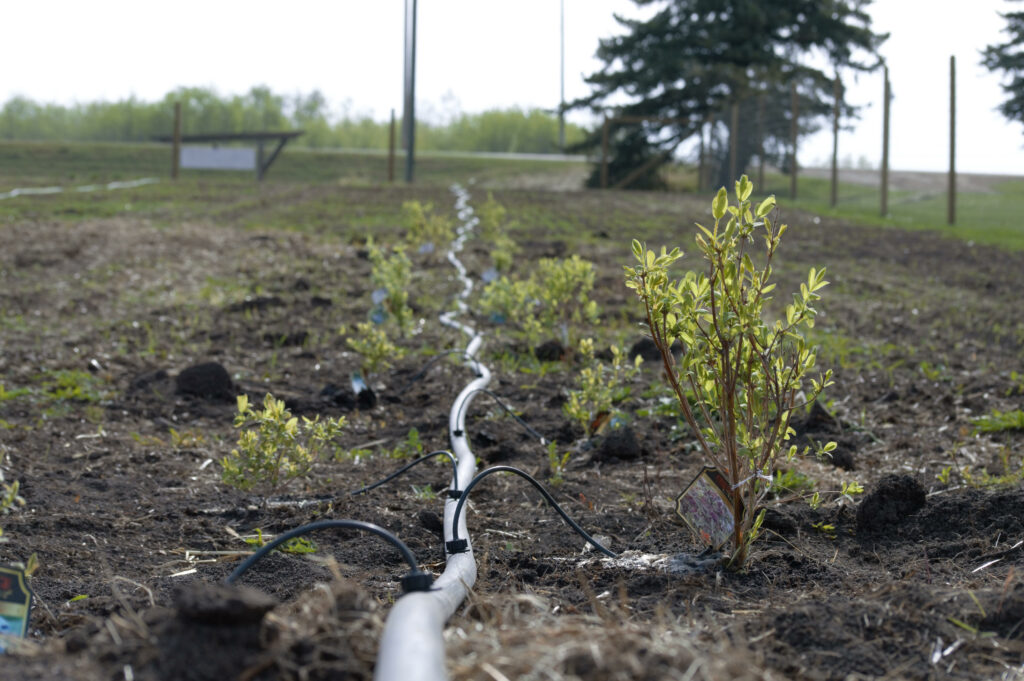 Rotational Grazing, Keyline Design for Maximizing Water, and Food Forests for the Future

While Ian Griebel grew up on his family’s mixed farm south of Castor, Alberta, he never thought he’d one day become a farmer. Griebel studied carpentry and pursued his journeyman certificate, and envisioned a life away from the farm. But in his late twenties, he and his wife, Dana, realized they wanted “to get back to the land”, and that his family’s farm in Castor presented an opportunity. Shortly after they moved back to the farm, Griebel’s father was diagnosed with cancer. A few years later, he passed away.

“We decided to call the farm ‘Redtail Farms’ as an ode to my father and his love for birds and ecology — and the way he farmed as closely with nature as he could,” says Griebel.

He credits his parents for “paving the way” in sustainable agriculture, as they were practicing regenerative methods during the late 1990s when these techniques were seen as somewhat crazy, or ‘alternative’, at best. “Local food, or grass fed beef was not really heard of at that time,” explains Griebel. His father formerly managed a 600-head feedlot, but Griebel remembers that he struggled morally with the environmental costs of conventional agriculture.

“My dad really felt that what they were doing wasn’t right for the planet,” explains Griebel. “So he said, enough is enough, and they planted everything back to grass.”

Today, Griebel is championing his father’s legacy of practicing perennial agriculture and raising nutrient dense, grass-fed beef and pork. He and his wife manage Redtail Farms with a variety of different regenerative agriculture techniques, including rotational grazing, riparian rehabilitation, and permaculture. They are committed to farming with nature, not against it, and restoring the natural grassland ecology.

When Griebel came back to the farm, he asked himself, “how can we raise food and actually enhance the environment?” The answer, he says, is in managing grass-fed beef. Griebel and Dana started out in their first year, experimenting with 12 head of cattle, and nearly decade later, they’re raising 70 head and processing the meat right on the farm.

“This year is a big milestone for us,” explains Griebel. “Everything we’ve raised will also die and be processed on the farm.” 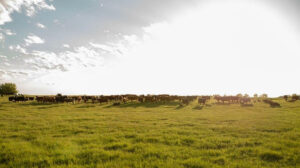 Griebel’s father used to have a small butcher shop on the farm. It was always a dream to expand the shop into a commercial operation. Recently, Griebel’s brother-in-law, a butcher from England, and sister, moved back to the family’s land and opened Blue Door Butchers. “It’s been a huge game changer,” says Griebel. “It allows us to create high quality, niche products, and utilize every part of the animal.”

They’re also raising pasture-fed pork at Redtail Farms, and while the pork is a profitable venture, Griebel admits that he isn’t sure if it fits into their long-term sustainability plan. “Pigs can’t survive on pasture alone,” he explains. “They require higher energy foods, so we supplement with imported grain and then rotate them through the pastures on grasses and legumes.”

They also rotate the pigs through forested areas on the farm. “If you look at where they come from, and their natural habitat, [pigs] are actually a forest animal,” says Griebel. The pigs feed on bark, insects, and root through the soil — disturbance which stimulates growth.

“When the pigs come in, they bring up roots with their noses, which stimulates new growth,” says Griebel. “They’re very good at stimulating the forest floor.”

Protecting, Capturing and Storing Water on the Land 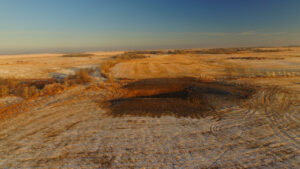 Redtails Farm is situated in a very dry part of Alberta, receiving only around 11 inches of rain annually. In the summer of 2021, Griebel and other farmers endured extreme heat and drought, as Alberta experienced the “heat dome” with temperatures exceeding 40 degrees Celsius. “Water is such a valuable resource,” says Griebel. “It’s something we really need to protect and care for. We’re focusing on a number of different ways to capture and store it in the soil.”

Protecting riparian zones is a critical priority at Redtail Farms. They use electric fencing to keep cattle away from water sources and prevent environmental degradation, and rely on solar pumps to get water to the cows during the summer. In the winter, Griebel relies on a number of wet wells, or stock waters fed by well systems. His goal is to coexist with the wild species on the land that also utilize these water systems, not seeing them as competition, but as part of a biodiverse ecosystem.

“It’s an indicator of a healthy ecosystem,” explains Griebel. “Seeing these different species around natural wetlands, and knowing that the water is soaking in and feeding our groundwater.”

The forested areas on the land also play a role in conserving water, he points out. “One of the bonuses in this country is our winters. We have six months of the year that we can actually store precipitation,” he says. But whereas snow in open areas tends to blow away, the trees capture and protect snow from the winds.

“The trees play an incredible role in capturing snow, while also creating shelter for livestock, and habitat for other animals and birds.”

Griebel has taken great strides to learn how water moves naturally across his land. “We’ve done a lot of work with contour mapping to understand the topography,” he says. They’re applying principles of keyline design, a landscaping technique that maximizes the beneficial use of water resources on land. Keyline design works with natural topography — the natural flow of water — to harvest and store water effectively. The technique was first developed in 1954 by Australian farmer and engineer, P.A. Yeomans, and has since been adopted widely around the world. Keyline designs include irrigation dams, gravity feed irrigation, stock water, and yard water. 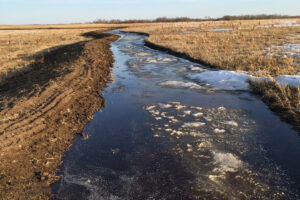 On Redtail Farms, they’ve built small-scale dams using clay to hold back water. “What happens [during the spring] is that the snow melts but doesn’t penetrate into the soil because there’s still frost in the ground — so it usually runs off,” explains Griebel. “So we’re looking strategically at stopping that water and holding it.”

They’re also diverting water to swale systems built into the land. Swales are shallow, broad channels with gentle slopes used to slow down, capture, and spread out water horizontally on the landscape.“ [In Australia], they’re utilizing key line design to capture rainfall,” explains Griebel. “Now, we don’t normally get monsoon rains like they do. But we do get a lot of snow. So we’re playing around with these techniques, trying to better utilize the snow. It’s the Canadian approach.”

Griebel credits the expertise and support of fellow regenerative farmer, Takota Coen, a 4th generational farmer and permaculture educator, who runs Coen Farm in central Alberta, along with Rob Avis of Verge Permaculture, based in Calgary.

Planting ‘Food Forests’ for the Future

One of the things that Griebel has continually asked himself is, “What would a more perennial food system look like on the prairies?”

With mentorship from Takota Coen and funding support from the Alberta Woodlot Extension Society, Griebel planted a ‘Food Forest’ on the land, which he describes as one of the greatest successes on Redtail Farms. The food forest consists of perennial fruit trees and bushes, including a diverse variety of cherries, apples, plums, haskaps, saskatoons, gooseberries, cranberries, currents, and chokecherries.

“If you look back and consider the land that was here before us, managed by Indigenous peoples, what were they living on? They lived on bison and many different kinds of berries,” says Griebel. “It’s what this landscape really wants to be.” 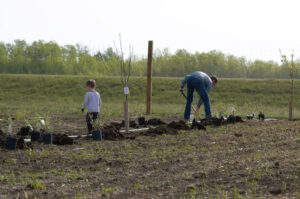 Once the food forest is established, it requires less energy from the farmer, he points out. “It doesn’t need to be weeded, or seeded, or planted. It just needs to be harvested and maintained a bit. It can produce an immense amount of fruit that would otherwise be imported,” says Griebel.

Can farmers play a role in stewarding the environment and mitigating the climate? Absolutely, says Griebel. “100 percent,” he says. “But the first step is for farmers to recognize that farming can also be a big part of the climate crisis. From there, we can take responsibility. How can we change our operations? What can we do to reduce the amount of energy it’s taking us to produce food?”

For Griebel, there aren’t just environmental benefits from the way he’s farming at Redtail Farms, but economic rewards, too. He’s striving to keep his energy costs low and avoid the ‘debt trap’ that so many farmers get caught in.

“The bottom lines are tough in agriculture — everyone is trying to make a living out there,” says Griebel. “We’re really trying to figure out how we can still make enough money, but be more gentle on the landscape and give back to it.” 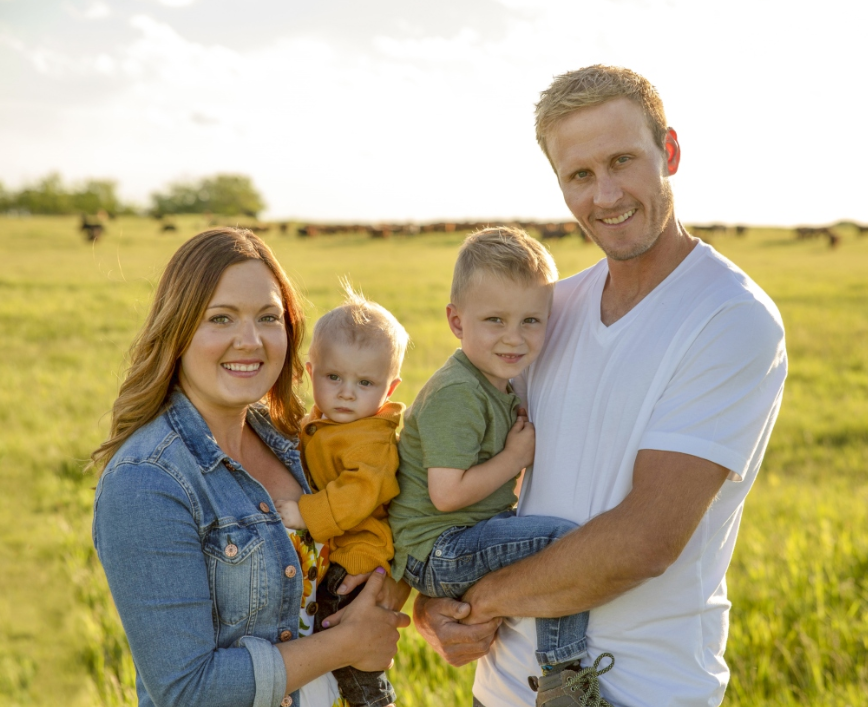 Redtail Farms, located just 3 kilometers south of Castor, Alberta, takes pride in raising nutrient dense, grass-fed beef (and pork) while regenerating the land that they call home. Ian Griebel and his wife Dana believe in responsibly producing delicious, health products, while having a positive environmental impact. Blue Door Butchers, run by Ian’s brother-in-law, is also located on the farm, which allows them to create high quality, niche products without wasting any parts of the animal.