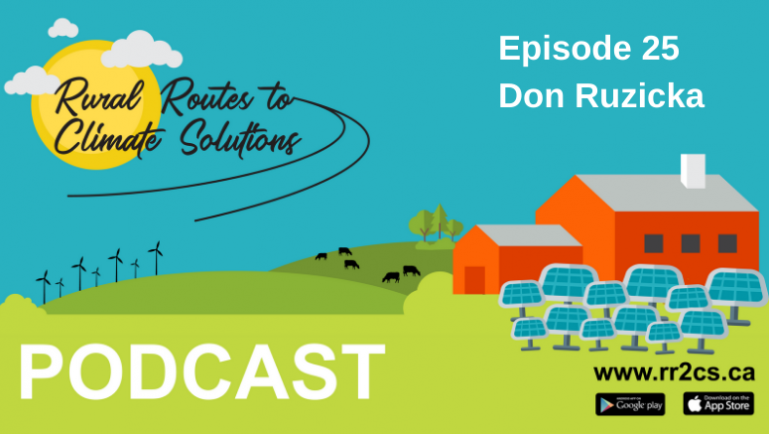 If you’ve attended any agriculture conference or event in Alberta, you’ve probably heard of Don Ruzicka and maybe even seen him in action. Don has been a staple in the agriculture community for decades, which is part of the reason he’s the very first ‘Elder’ to grace our podcast (he won’t be the last either. Keep on reading). When many producers stop and think who they can go to for advice and a good chat, Don’s name usually comes to mind. He has no air or sense of superiority about him, he’s just a producer whose management path took a different route than many other producers in today’s industry. That doesn’t make him unapproachable, it makes him relatable.

Many of today’s agricultural producers are facing the same issue Don and Marie (Don’s wife) are facing right now. The average age of producers in Canada is 55 at the moment, which means many are approaching a time in their lives where they will likely consider retiring. Don, being the relatable guy he is, is also at this point. It can’t be easy to dedicate one’s life to not just a job, but a home and a lifestyle and then be faced with the task of passing it on to someone else. Don lays it all out for us as he describes how thoughts on his own retirement and his worries about how he will feel after he retires.

In this episode, Don shares his and Marie’s experiences in their journey to where they are now: from the Holistic Management course that changed the direction of their farm entirely to the feelings of reparation that drove them onward in healing their land to working with conservation groups to urging their customers to come visit the farm to see how their food is produced. Don even shares some of the landmarks on their timeline of healing their farm like the arrival of meadowlarks after an 11-year absence (the Ruzicka’s began implementing their holistic management practices during that period of time).

If you want or need a reminder that there are agricultural producers out there that love the land and work towards it’s betterment and condition then look no farther than this podcast episode, Marie and Don Ruzicka and Sunrise Farm in Killam.

This is the first installment of our Farm Elders podcast series. Through this series we hope to capture the words, thoughts and knowledge of the agricultural producers in Alberta who have been lifelong stewards of the land. More stories like Don Ruzicka’s will be released soon.

(10:41) “What does it feel like to try and get out of farming at this time?” Don explains his feelings of guilt and worries about his retirement.

(17:13) When people ask Don why he does what he does, Don tells many people the short answer is reparation for his ‘sins’.

(36:45) Don explains that by allowing alfalfa to grow tall, the leaves then fall as litter and the stalks remain to act as a natural snow fence, collecting snow during winter to help water catchment. This touches on people’s idea that forage not grazed is forage wasted.

(39:49) Utilizing deep rooting cover crop species also helps with mineral ‘mining’, which is bringing minerals located deeper in the soil to the surface where they can be accessed by animals.

(47:41) Unless the consumer supports the farm, a farm cannot be sustainable.

The co-op that intends on buying Don and Marie’s farm
http://spiritoftheland.ca/sunrise-farm-co-op/